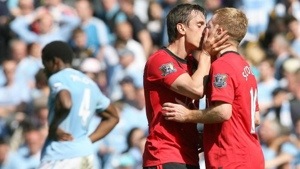 Every boy grows up with an assortment of heroes. Maybe one is a superhero. I was always a Batman kid, myself. Maybe one is your father. He was and is my greatest inspiration. For many, a sporting hero takes up the mantle as one of your greatest heroes. In one of the most emotional weeks in the life of any Manchester United supporter, I am faced with the seemingly impossible task of saying goodbye to two of my lifelong heroes.

Tomorrow, Old Trafford will bid farewell to Sir Alex Ferguson and Paul Scholes. I would give anything to be there, to say goodbye one last time, but this is one of the drawbacks to living an ocean apart from your life’s greatest passion. Maybe it will spare me an emotional breakdown, though I imagine even thousands of miles away I will not be escape the heartbreak that comes with celebrating the legacy of two remarkable legends.

At the age of 24, I’ve never known a life without Sir Alex Ferguson. How could I? He’s been at the club longer than I’ve been alive. The same can probably be said of many United supporters today. That speaks to the magnificent legacy Sir Alex is leaving behind. Today, three days after his announcement, the reality that Sir Alex will not be the Manchester United manager next season still hasn’t sunk in. Such is the surreal nature of his retirement. One day soon, we will look back on these past few days and be thankful that we had the incredible privilege living during Sir Alex Ferguson’s reign. There will come a day that I share my fondest memories of Sir Alex with my children, remaining grateful I was able to witness a legend accomplish his impossible dream.

So much can be said for what we take away from these moments and the curtains close a magnificent era at Old Trafford. Too often we place our sporting heroes on a pedestal on which they do not belong, but Sir Alex Ferguson present a contradiction to this. He has reached the pinnacle of football, showing us all what true character is. A relentless determination for success has led our beloved club to the summit of English football. A true master of his trade, and an example to us all.

Much of the same can be said for another departing hero. As we say our goodbyes to Sir Alex Ferguson, many have recollected his finest quotes. From “football, bloody hell” to knocking Liverpool off their fucking perch, Sir Alex has always drawn attention as the focal point of the club. The same can not be said of Paul Scholes. As he prepares to walk away from the game he loves, we remember not quotes that he said, but those said about him. In the coming weeks there will no doubt be mentions of quotes from Sir Bobby Charlton, Zinedine Zidane and Xavi. But that is Scholes. He just wanted to play the game. He let his game speak for him, and consequently others heaped deserved praise upon him.

Though his importance in the club’s history will be remembered in epic proportions, just as Sir Alex, Scholesy shunned the spotlight, preferring to play the game he loved as if he were in the shadows. He will no doubt begrudgingly have to accept rapturous goodbye from the United faithful tomorrow. In a strange way, the timing of his second retirement is perfect. While Old Trafford rallies to remember the legacy of its longest-serving manager, Scholes will hope to quietly say goodbye and sneak down the tunnel one last time into retirement.

I wish I could put my admiration for the man into words, but in this moment words fail me. By far my favorite player to pull on that red shirt, Scholes makes up some of my fondest childhood memories. It will be impossible to look back without a single thought of that ginger genius. There is a famous T-shirt among United fans that read: “Get Up. Go To Work. Play The Game. Get Showered. Go Home.” That was the brilliant simplicity of Scholes. He loved the game. Simple. That’s how he’ll be remembered. He never got caught up in the other vices footballers sometimes do. He just played the game. That same simplicity translated into his game. Seemingly make the impossible look easy on the pitch. Never one for flair, he grabbed the attention and hearts of fans with his overwhelming ability to make the game look effortless among a sea of superstars.

Old Trafford will undoubtedly lack a dry eye tomorrow as we bid adieu to two of our greatest icons. Too often people find heroes in famous people only to have their heroes disappoint them. I can truly say that looking up to Sir Alex Ferguson and Paul Scholes has helped mold me into the man I am today. Two men who reached the greatest heights of the footballing world. Two men who showed incredible character in their quest for perfection. Tomorrow tears will flood at the Theatre of Dreams, but days, months, maybe even years from now, we will look back and smile knowing we witnessed greatness.

One response to “Reaction to retirement of Scholes”