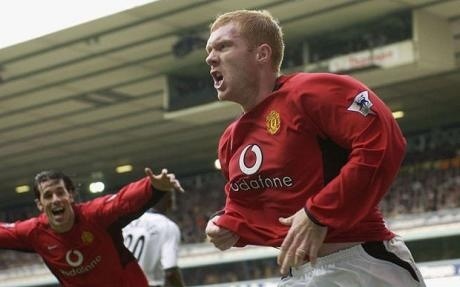 Paul Scholes has announced his retirement for the second time. The Salford lad has made 40 appearances and scored 5 times since he first ended his career at the of the 2010-11 season but returned in January after admitting he missed playing.

Scholes signed a one-year contract last year with expectation that this would be in last season. We all saw it coming and the news is not as difficult to take as it was back in May 2011.

“I am finally hanging up my boots for good,” said Scholes, who will play against Swansea on Sunday. Not only will fans be waving goodbye to the ginger prince, but it is also Sir Alex Ferguson’s last fixture as manager at Old Trafford. And that, we’re obviously gutted about.

On the bright side Manchester United will be presented with the Premier League trophy. The club’s 20th league title will, of course, be Scholes’s 11th which is a remarkable achievement but one that is without a shadow of a doubt deserved.

He added: “Playing football is all I have ever wanted to do, and to have had such a long and successful career at Manchester United, under the greatest manager of all time, has been an honour.”

Ferguson said: “Paul is a truly unbelievable player. He has always been fully committed to this club and it has been a real privilege to work with him for so many years. He will play at Old Trafford on Sunday against Swansea and will collect an unbelievable but well-deserved 11th Premier League medal.”

Stretty News would like to wish Paul Scholes the best with his retirement.