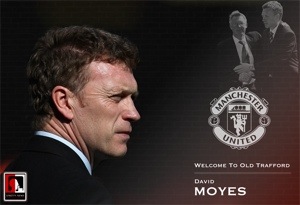 As a frequent guest on the Full Time Devils YouTube channel, I took part in a video wishing David Moyes the best of luck after being appointed Manchester United manager. Many have questioned whether he has what it takes to succeed Sir Alex Ferguson and drive on what the club is today.

United are in a much better state in comparison to what it was like when Ferguson got the job in 1986, regardless of our Glazer situation. Before arriving in Manchester, he bettered the Old Firm and won in Europe with Aberdeen. Speaking to reds that remember his first few seasons, I learned the style of play was not very attractive but he built a squad and made watching the Reds entertaining again.

My initial thought when I heard about Moyes becoming manager before it was announced was that I did not think he did enough to get the biggest job in world football. Since then, however, I have really warmed to the idea. United were never looking for a quick fix. They were always going to look to appoint someone for the long-run and Moyes resembles that. He is 50-years-old which is a good age to settle down and build on what we already have.

I look forward to Moyes proving the doubters wrong (yes, they are out in full force already). He is a humble character who will ask for guidance if needed from Ferguson. Can you picture Mourinho being like that? Not a chance. He ticks the vast majority of boxes, so I am looking forward to witnessing the next chapter of Manchester United’s history.

Sir Bobby Charlton summed up the appointment brilliantly: “In David Moyes, we have someone who understands the things that make this such a special club.”