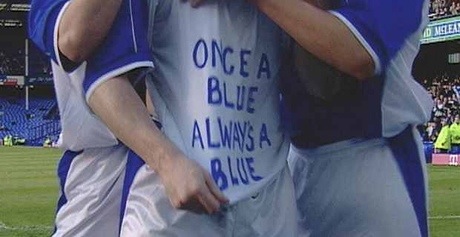 Although not as damning, it is like a repeat of what happened in October 2010. Reports from a number of respected journalists claim Wayne Rooney has threatened to leave Manchester United for a second time in the space of three years. It shouldn’t surprise any of us though, his “once a blue, always a blue” t-shirt was a clear warning when he broke onto the scene at Everton because that obviously was not the case.

When Rooney arrived at Old Trafford in 2004, aged 18, Everton earned £25.6 million in return. It was the highest fee ever paid for a player under 20-year-old. We were all excited to have him at the club given the potential he promised and he even got off to a perfect start scoring a hat-trick on his debut against Fenerbahce. Excitement was on overload, our new kid on the block made an incredible impression and none of us could wait to see him grow into a world beater.

Rooney had this drive and determination all football fans love having in their team. His temper had its critics but that was the player we fell in love with, not the one that fancied a move to City when money was put on the table. Some look at Steven Gerrard, who supported Liverpool all his life, as a loyal one. He totally betrayed the club and was then rewarded with a bigger and better contract for going public about wanting out like a horrible little mercenary. That is what we were faced with in 2010 at Manchester United and it was horrible to see.

A great deal of United fans accepted Rooney’s apology when he made the u-turn. The excuse was that he was ill-advised by agent Paul Stretford but Wayne stands on his own feet. He was the main player in our squad at the time after Ronaldo left a year earlier, so it was obvious that he was loved. Not only did Rooney kiss the badge the season before but he spoke about staying at the club for the rest of his career, and I foolishly bought into the so called loyalty. It was his chance to really drive on and become a legend at the club but that backlash, for me, was a kick in the teeth. There is no doubt that his behavior cast a shadow on his Manchester United career.

When you think about it now it was ironic that Rooney questioned our ability to attract top players, yet after the signing of Robin van Persie, he is likely to be the fall-guy, the player who faces the consequences. A United side minus Rooney was unthinkable back then because he was irreplaceable during that golden spell. His stock has fallen since and there are not so many sleepless nights about the prospect now.

Three years later we are met with similar stories; Rooney telling Ferguson he wants out. That will come across as a real slap in the face for fans that took him back after the embarrassing fiasco we underwent in 2010. And if it wasn’t for the respected journalists reporting on it, I would more than likely brush it aside but these stories do stand. The big question is where will Rooney end up if he happens to leave? I cannot see the Rooneys living abroad, therefore right now his most likely destination is Chelsea it would seem.

My thoughts are clear and simple. If Rooney doesn’t want to represent the club, ta ra. I am sure in the future we will find players as good if not better. You cannot say that about Sir Alex Ferguson.

20 responses to “Rooney – Should he stay or should he go?”