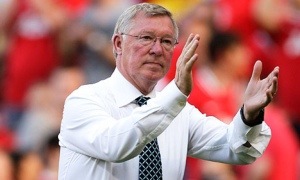 8th May 2013. Remember the date. This day will go down in footballing history as a truly monumental and crushing day from our perspective. The greatest manager to have ever graced the game saying an emotional, tear-filled goodbye to those who have worshipped him, the king has left the building. 38 trophies delivered over the course of 26 unforgettable years, the man has performed god-like miracles.

We will never see his sort ever again, we have been truly blessed and honoured to have been treated to such magic over the years. We will seemingly be in the real world after Fergie’s 1,500th game in charge away to West Brom, that is a truly staggering number in itself. Whoever takes the position has the unenviable task of filling some pretty big boots, so who is leading the race to replace Ferguson?

Most media outlets and bookmakers have instilled Everton’s David Moyes as the favourite to replace his fellow countryman, with Real Madrid’s Jose Mourinho following close behind. The growing consensus though is that Moyes will eventually be announced as Ferguson’s successor, but is this the right way to go?

If heart ruled head, the majority of United fans worldwide would want Mourinho to shun Chelsea’s advances and make a sensational return to England by taking the reigns at Old Trafford. Mourinho on paper is the best alternative and closest thing to Ferguson in terms of mentality and success. He is a born winner and a proven winner, whichever team has had him at the helm has always picked up silverware. United’s crushing Champions League exit to Mourinho’s Madrid was the almost perfect job audition and interview for the Portuguese. He was almost pandering to United, almost saying to the directors ‘look at me, I’ll be available and I have shown I have a soft spot for United’. The way he conducted himself in saying that ‘the best team didn’t deserve to lose’ in a way warmed our hearts amidst the sour nature of our exit.

That said, Mourinho is a notorious powder keg despite said winning qualities. His exit from Chelsea was acrimonious and frosty to say the least, and although his departures from Porto and Inter were less distasteful, his certain exit from the Bernabeu can be applied in the same catgeory as Abramovich’s cold antics back in 2007. He is a man who is surrounded by controversy, often turning out to be the pantomine villain when dealing with the media and he is a manager who has never enjoyed sustained success which is something we will crave- his stints at clubs have always been short-lived, he is not someone you can rely on to build a legacy. Although hypothetically it would seem that Mourinho is tailor-made for this kind of situation- taking over from the greatest in the most dramatic circumstances, he would not represent a typically United appointment. Mourinho may be made for this moment, but it looks for all intents and purposes that he will once again take part in his vengeful marriage with Abramovich.

That leaves Everton’s David Moyes as the logical target, the safer option if you will. His contract with Everton is due to expire shortly, meaning compensation fees would be minimal if at all required. Apparently, the next manager will be ‘cut of the same cloth as Ferguson and Busby’, doesn’t exactly scream Mourinho does it? Moyes has a vast reputation of nurturing young talent- he unearthed our very own Wayne Rooney after all, and that fits seamlessly into the United gospel.

Moyes would also be seen as the safer option in terms of stability. That is certainly the one thing we will look to achieve post-Ferguson, his decade in charge at Everton suggests that he is not one to throw in the towel or looking to sever ties quickly, unlike our aforementioned ‘Special One’. One striking thing that is lacking on his CV is the amount of silverware: This is a definite blot on his copypage, deep down we are all thinking ‘how on earth can someone with not a single trophy to his name be a worthy successor to the greatest ever manager?’ Apparently Moyes has also never won a single match at the supposed ‘top 4’ grounds, not a stat one can dwell on with confidence. Another pitfall to the potential Moyes arrival is he would be walking into an environment completely alien to him- never has he experienced the cut-throat, hard slog of a 9 month title chasing onslaught, he has never come across these kinds of pressures- that includes the pressure of winning week in week out, dealing with bigger names, let alone trying to replace Sir Alex Ferguson. You can bet your bottom dollar that the board and Ferguson hedged their bets when it came to naming his eventual successor, preferring stability and a steady head rather than the temporary stint, overt dramatics and pyrotechnics and instant success of a Mourinho.

Ferguson has apparently had his input into his replacement, although he has a working respect for his old adversary Mourinho, it is well-known that Ferguson is a big advocate of David Moyes- he tried to lure the Everton manager to United as a number 2, before handing that responsibility to Walter Smith at the time.

Regardless of who takes the reigns, what is of paramount importance is our requirement to unconditionally and unanimously give our support and backing to the new man, besides I for one do not envy his eventual successor, they are seismic shoes to fill. We cannot afford to voice any potential discontent from the terraces like those bigotted Chelsea fans did over Di Matteo, such plastic support has no place at a club like ours, especially when the need for stability will be needed as much as ever to make the transition post-Ferguson as seamless as possible. If we turn into the trigger-happy, callously managed sort, there will be no going back. So whether it’s Moyes or Mourinho, whether it’s the popular choice or not, we will go on. We always do. We defied logic by not crumbling post-Busby and look at us now. We will never die. The need for stability can be highlighted by looking at how the mighty have fallen- take Nottingham Forest post-Clough. Since that legend left his club, they have go on to have 20 managers in 20 seasons, hardly the imprint or benchmark for stability or sustained success. That is precisely why Moyes is the favourite for the post.

It is going to be a riveting and gripping 48 hours, in which time we will have supposedly named Fergie’s successor, but now is the time to wish the greatest manager ever a very happy retirement and say thank you so much for everything.

We have been truly blessed.

For every single one of us, loves Alex Ferguson.

3 responses to “Goodbye Sir Alex, but what now?”