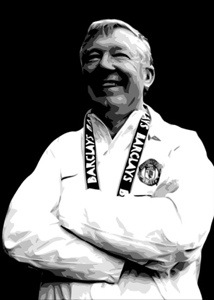 Exclusive to SN, Musa Okwonga from ESPN sent in a poem on Sir Alex Ferguson. Celebrating 20 years of Eric Cantona he wrote another poem which was published on the official website.

Half man, half momentum:
Fergie keeps it moving –
Builds plenty of teams, and each season, renews them –
Any errant stars in his path?
He removes these;
Beckham, Ince, Keane, Ruud (and maybe Rooney):
This Glaswegian Caesar slays his own generals
Except Giggs and Scholes,
Who’ve the globe’s biggest medal hauls:
He’s given Liverpool a shove from their pedestal
And we thought he was finished; that’s the greatest trick this devil pulled –
He was never heaven-sent, he was Govan-sent:
His reign has tripled that of Thatcher in government:
He’s the proud bearer of knighthood and grudges
With the power to stretch added time as long as he covets…
“Will he retire?” –
(-This enquiry is rhetorical.)
If your play is diabolical
He’s drying out your follicles:
So many trophies. And this has been his secret:
To sit tight when all other bums are squeaking.
King of soundbites,
High priest of the presser,
It seems he’ll pace the touchline forever;
When the stars fade and our world comes to ruin –
There will still be Fergie
And the gum he is chewing.

2 responses to “POEM: Sir Alex Ferguson – half man, half momentum”