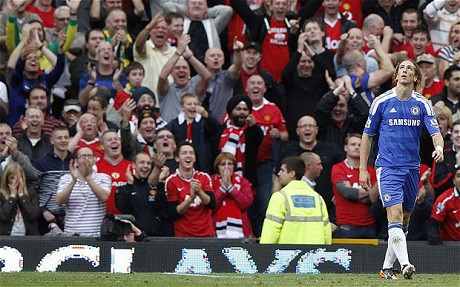 Ahead of Sunday’s game I caught up with Royseven vocalist Paul Walsh, who has taken some time out to discuss his beloved Chelsea.

Azpilicueta has had a fantastic season, he’s adapted well and although two penalty decisions have gone against him in Europe, he’s still had a very promising beginning to his Chelsea career and is the sort of determined/non-mouthy player we need. Obviously Mata and Hazard have been inspiring but their work ethic is undoubtedly hampered by mis-firing Torres. Yes, he’ll probably have scored over 20 goals by the end of the season, but less than 10 of those will have come from the Premier League, and that is not good enough. He doesn’t have the physical strength to hold up the ball, as Drogba did, nor the fancy and reliable feet of Anelka, so even though I’m a massive fan of his, I’m disappointed in his progress.

Benitez, eh? It was Abramovich that made him manager. Are fans afraid to confront the sugar daddy?

I have no doubt that Roman Abramovich is quite sure how discontented the fans are with the revolving door managerial policy at the club, though I also believe he’s a genuine fan and wants the club to do well, not just for financial reasons. The fact is, his policies have led to more success than the club witnessed in the previous half century, so although it’s erratic, he has achieved results. I think Di Matteo deserved a season to do whatever he wished, even if it led to mid-table mediocrity. He brought us the Champions league trophy for the first time and that’s a memory all of us will cherish, so I was sorry to see him go. Secretly, I wanted Rafa to do well, I really hoped that he could prove all the cynics wrong and it would be the dawning of a new positive era. But alas, results have been so inconsistent that he hasn’t managed to convert very many of us. I watch most of his press conferences and see every game, and I don’t believe the man is a winner. Yes, he has had some success, but it hasn’t been emphatic or consistent enough to convince me that he was necessarily central to those victories. Perhaps that’s harsh (as Liverpool fans seem to worship the ground he walks on).

Think we both know Benitez won’t be there next season. So who do you realistically want Roman to appoint as your next manager?

Ugh, it’s a nightmare. Obviously Guardiola would have been amazing and we all thought that would happen, but I’m reluctant to celebrate the return of Jose as he doesn’t like to stay at clubs for too long, and likes to cause drama. I really don’t want Pellegrini who also seems to be on the short list (another under-achiever who’s having one good season and now is tipped for everything), and I think perhaps we should have stuck with AVB for at least a season or two. I’d rather Jose but I’ve a nasty feeling it won’t be as emphatic a reign as his first one, how could it be, I guess?

What was your favourite United Chelsea game?

Probably the April 2006 game at Stamford Bridge which sealed our second Premier League title when we beat United 3-0 with Gallas/Joe Cole and Carvalho scoring.

Fernando Torres. £50 million. Has time run out for the Spaniard?

I hope not, I’m such a big fan of his, and he was mesmerising at Liverpool. Surely it’s like riding a bike and you don’t just forget how to score? Anyway I hope he stays and regains some of his old form so that he doesn’t reflect on his Chelsea years as a waste of time. The games I’ve been to and when I’ve made a point of watching him, he’s worked really hard up and down the pitch, he’s done his best for the team but just seems to lose all his confidence and conviction close to the goal. It is soul-destroying to watch, so I can’t imagine what its like for him.

While away with the band, how do you find the time to watch Chelsea every week?

I just do what I can, I hate missing games. If I’m on stage or travelling and the internet connection is crap, I’ll have someone text me and keep me updated. My drummer is a United fan and we’ve had a few occasions where we’re overseas trying to locate pubs showing the game between the two teams. Football games punctuate my life, Summer (when we usually tour) is a nightmare and international football (friendlies/qualification rounds) bores me, unless it’s a big comp like the World Cup or Euros. Anyway, it doesn’t matter where I am or what I’m doing, I always stay in touch with the games.

Thoughts on Lampard not getting a contract extension? Do you think he would improve Ferguson’s squad?

Let’s make this clear – Lamps will NOT be going to United – we need to renew his contract. If anything, United has shown that investment and belief in older players pays off. Frank is still fit, he still has passion, he’s about to break the club’s scoring record – why the hell would his contract not be renewed? It’s ludicrous really, and I hope it’s sorted very soon. I can understand why they might want to get rid of JT, and he has already said that he would move to an overseas club if he’s sold off. In answer to your question, Frank Lampard would improve any squad.

Good. Lampard is not the answer to our midfield problems, but his name does not seem to be going away any time soon. If you had to take any player from United to Chelsea, who would that be and why?

Well, Van Persie would be the obvious choice as he’s doing all the things our strikers are not: scoring/holding up the ball/showing conviction. Carrick had a great season too but we’ve enough going on in midfield so there would be no point in nicking him. We need goal scorers at the moment as we’ve loads of players in other departments.

Which player do you hate the most?

In general? Or from Chelsea?

I’m not a fan of Mikel – he’s a back passer, not progressive enough, and loses the ball quite a bit. I can’t believe he’s had a three year extension and Lamps is still waiting. If I could turn the clock back, I’d make sure you guys got him after all!

Ha. We got over £12m for his autograph. Anyway, lets have your match prediction?

I think it will end 2-2 as Chelsea won’t be able to muster any more goals than that and United, whilst motivated, won’t be as pushed as they would have been earlier in the season. Lastly, congrats to you and the other United supporters on the impressive feat of winning yet another title. Enjoy!