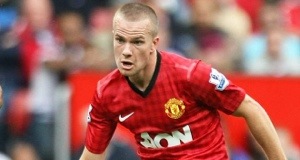 This time last year, as Tom Cleverley was watching from the bench as Paul Scholes was rolling back the years, we were hoping that we would not be asking this question. Cleverley was just getting himself back into the first-team picture after a crude tackle from Kevin Davies virtually ended his season, a season on which we could reflect with relative satisfaction.

He was thrust into the heart of our midfield after a virtuoso cameo helped us to beat the noisy neighbours in the Community Shield. Believe it or not, Michael Carrick was out of favour at this point. Sir Alex, much like us all, was wooed with the boundless energy and fearless gung-ho attitude provided by the Anderson-Cleverley partnership.

So after being the beneficiary of a successful loan spell at Wigan, wish we could say the same for Chilean Angelo Henriquez, where does Cleverley stand a year on from those enterprising initial steps?

For all intents and purposes, Cleverley looked like the real deal for most of the season. Despite getting a raw deal from one particular man who works for TalkSport (do you need another hint?) who was adamant that pass completion in the 90% region was not sufficient, Cleverley is now a fully established England international. In fact, he is the only player to have started all of England’s competitive matches post-Euro 2012.

Many journalists like said above journalist (*cough* Collymore) were quick to point the finger and raise the argument that the Bradford born midfielder’s goal return is shy. He sought to right that wrong this campaign and has notched 4 goals in all competitions (all with the right-footed sidefoot into the far corner if you remember).

There was a time this season, as well as the previous, when Cleverley was hailed as a potential saviour in our midfield, if Cleverley performed like we all know he is capable of he could save us forking out millions for a midfielder in the long-run.

But more recently, Cleverley has been deployed on the left-side of midfield, which we all know is not his niche position. This has led to him not performing at his fluid best, he has often looked awkward on that left-flank. You can never have too many attacking options, but the need to accelerate the development of Shinji Kagawa and finding a comfortable position for him where he can flourish, and also trying to accomodate Wayne Rooney in a similar situation has maybe contributed to Cleverley’s temporary demise.

To develop my point on the left-wing, Cleverley’s last start for United was in this very position against Chelsea in the FA Cup replay. It was not one of Cleverley’s better days at the office and we have only seen looking glum on the bench ever since. In the space of a month, he has freefallen from starting eleven to featuring in last night’s under 21 match against West Brom. Incidentally, Cleverley played the whole 90 minutes and gave a confident showing, it was refreshing to see him back on the pitch.

This spell on the sidelines will hopefully kickstart a run of form for him again and is actually not a bad thing all things considered: it is crucial for youngsters that there is no let-up, this demotion will serve as a reality check which is what youngsters need sometimes. We have seen with Federico Macheda that it is important despite all the fame at such a tender age to not think you are the dog’s bollocks just because you are wearing the tracksuit with the club’s badge on it. In Tom’s case, just because you’ve collected your first league winner’s medal. Cleverley will definitely not fall into the same poisoned category, he has been raised as a United lad and in the United education system, the first league medal will inspire him to do it all again.

I asked the question whether Tom has kicked on as we’d all hoped on Twitter a couple of days ago, the responses were vast and the majority were impressed with his early season form whilst disappointed with his fortunes post-winter. This sounds familiar doesn’t it? It’s a virtual mirror image from last season, unfortunately.

That said, there is much to like about Cleverley. He offers bustling energy, always looking to get on the ball, always seeking to play nice one-two touch passing, always making himself available. He works very well alongside Michael Carrick, the two compliment each other (remember Cleverley’s goal against Sunderland? And that one-two between the pair, that was beautiful). As he matures, he will no doubt improve his goal tally. Hopefully we’ll have a midfielder capable of getting into double figures again shortly, we haven’t had this since Scholes was in his pomp.

There are still plenty of hard yards ahead in Cleverley’s development, but we have three dead rubber fixtures in which I’d expect him to feature in. He needs the confidence boost back, the best Cleverley is the one with that spring in his step. Yesterday’s under 21 outing against West Brom, although it looks like a demotion on paper, will serve as the kick up the backside he may require but it looked like the swagger and confidence was returning.

All in all, he is a league winner, and there is no better sight than a player with a medal round his neck, particularly one who has come through the ranks. There is plenty to build on and a lot to take from this season.

Things could be worse though, all Tom needs to do is take in this quote from Gary Neville during his illustrious career at the top with us: “I always tell the young players here if you look down at your shirt and see a Manchester United badge, you’re not having a bad day. You’re doing all right. The day I don’t have the United badge on my chest will be a sad one for me. I don’t think I can ever have the same feeling playing for another football club”.