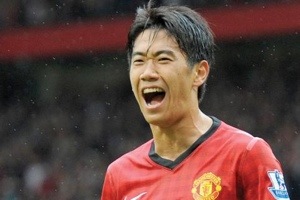 Borussia Dortmind fans were on the streets of Madrid tonight chanting the name of Shinji Kagawa ahead of their Champions League semi-final at the Santiago Bernabéu. Just last week their fans voted the Manchester United midfielder as the number one preferred replacement for Mario Gotze, who will join Bayern Munich in the summer.

Kagawa, 24, arrived at Old Trafford last summer with a big reputation having played a key role in Dortmund’s back-to-back Bundesliga triumphs. The Japan international has shown plenty of glimpses of quality throughout his debut season but injuries hampered his consistency.