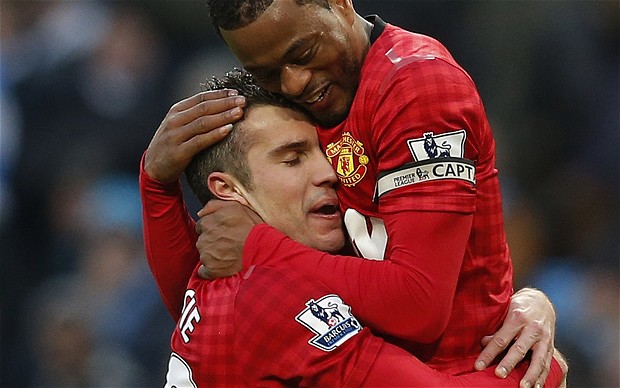 Arsene Wenger reckons United would have won their 20th league title last year, had QPR not bottled it after hearing they would not be relegated to concede two late goals against City. However yesterday softened their cough, being relegated following a scoreless draw away to Reading.

Although, United bounced back this season winning the title with help from Robin van Persie. The striker almost walked into the home dressing room following his arrival at the Emirates on Sunday, opted not to celebrate the equalising penalty and then went for a chat with his former team-mates after the 1-1 draw. Still, the Arsenal fans gave him a torrid time.

Evra cannot understand why, given what Van Persie did for Arsenal during his time at the club, but he thinks winning the league this season proves the 29-year-old made the right decision.

“He hasn’t made the wrong choice,” said Evra. “It was a long time that he didn’t win the league. He has come to Manchester United and won it. I still don’t understand why the fans boo him. I am disappointed that the fans have quickly forgotten what he did for the club. I think he felt it as well.”

Van Persie’s goal took him within one of the 30 barrier, and in netting 25 in the Premier League the Dutchman has broken the record for most league goals in a debut campaign for United. But Wenger bizarrely claimed he hadn’t scored because it was a penalty?

“I don’t think he scored,” Wenger said. “He scored a penalty.” Wenger was reminded that they all count, to which he replied: “It counts but it’s not completely the same.”

Aggrieved United did not claim the victory they deserved, Evra was impressed by the hosts’ battling qualities.

“They were one of the most aggressive teams I have played against,” said the France international. “It was good to see Arsenal like that. They always get abuse about being a team with good football but not being aggressive enough. This time they were.”