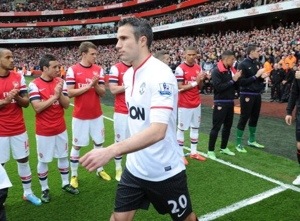 When Robin van Persie stepped foot off the team coach to enter the Emirates he met a few old friends from his days at Arsenal. After being welcomed he walked towards the Arsenal dressing room like he once did only to notice he was heading in the wrong direction.

Much of the talk before kick off was in relation to the guard of honour. Arsenal gave one and Van Persie heard a few claps amongst the boos. You do have intelligent Arsenal fans that refuse to stoop to the level of others being thankful for what he did at the club instead of being bitter.

Last season Van Persie scored in both games against Manchester United. This season, however, he has done the opposite scoring against Arsenal home and away.