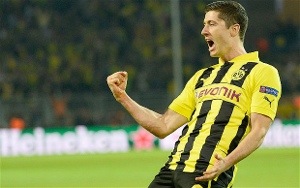 Borussia Dortmund’s scoring sensation Robert Lewandowski continues to be linked with a move to Old Trafford despite German giants Bayern Munich leading the race for his signature.

Following confirmation that Mario Goetze will join Bayern in the summer, many do not believe that Dortmund want to do further business with them. They have already lost one of their best players to a team in the same league. Doing it again would make little sense and their ambitions would become increasingly more difficult to achieve next season.

When asked about a possible move for Lewandowski, Sir Alex Ferguson admitted there is interest.

“Dortmund fans are not going to be happy about Goetze – and I don`t think they will sell Lewandowski to Bayern Munich now. Have I got room for him? I can find room for anybody!”

The question many seem to asking each other is ‘do United need Lewandowski?‘ From what I’ve seen of the Polish striker this season, I believe he would improve any side. That’s something I said about Robin van Persie before he joined us. Thinking about both of them leading our attack next season makes me dizzy.

One response to “There is room at United for Lewandowski”