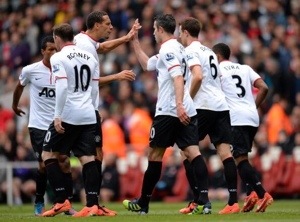 David de Gea – Showed why he has been one of our most improved players. Superbly kept out efforts from Cazorla and Walcott to keep United in the game in the first half. Kept his concentration when we shaded the second half. The transformation from the skinny kid that arrived in England is vast. 7/10

Rafael – Got forward with typical verve but didn’t have one of his better days at the office. Booked for cynically tugging back Rosicky and misplaced a few passes. A rare blip in an otherwise excellent coming of age season for the Brazilian. 5/10

Rio Ferdinand – The Rolls Royce of defending once again showed that age is no barrier, classy as ever and made some big headers in the second half when Arsenal put crosses into the box. Different class today and proved why he is worthy of another year at United. 8/10 MOTM

Jonny Evans – Easily rolled for Arsenal’s goal but was steady alongside Ferdinand, he dealt well with Podolski who was subbed as a result. Much to build on for the Northern Irishman. 7/10

Patrice Evra – Let Walcott run in behind for the opener despite being offside, Walcott troubled him all day but as ever Evra provided a more than useful attacking outlet down the left. 6/10

Antonio Valencia – Committed performance but was lacking in a bit of quality, especially with his final delivery – one cross in the second half in particular that went astray for an example of this. Rather summed up his season – could have been better. 6/10

Michael Carrick – Although Arsenal pressed well against him in the first half, he came into his own, much like United, in the second period. He was able to pick his passes with the usual metronomical accuracy as Arsenal’s intensity slacked. This allowed us to get a grip on proceedings. Another quietly effective display which has been what we’ve come to expect, he’s had a fantastic season. 7/10

Phil Jones – Bustling, full-blooded and no doubt funny face pulling, Jones put his all in today. Missed two presentable opportunities to score with his head. Provided energy alongside Carrick in the engine room. 6/10

Nani – As has typified Nani’s United career, this performance was hot and cold. Much improved in the second half giving Sagna all sorts of problems, but didn’t get on the ball enough and the performance was rather in fits and starts. On his day he can be majestic, we just haven’t seen enough of those days lately. Looked a livewire in the second half though, although it looks like he’s running out of time to earn a new deal. 6/10

Wayne Rooney – Perked up in the second half after a subdued first half. His link play with Van Persie was very good as usual, played a delightful ball into Giggs’ path to send him clear, denied a couple of times by their keeper. Substituted again though, are the signs ominous? 7/10

Robin Van Persie – Looked like the occassion got to him initially on his first return to the Emirates, but he won the penalty and duly converted it with aplomb. Some classy touches and combinations with Rooney. Thoroughly professional game from the man who has been the difference this year. Showed his class by applauding the grudge-bearers who booed him throughout the game. 7/10

Anderson – Added fresh legs in midfield and sprayed the ball about nicely, did what was required. 6/10

Ryan Giggs – Almost won it after Rooney’s raking ball picked him out, only noteworthy involvement. 6/10

Hernandez – No time to make an impact even for him.