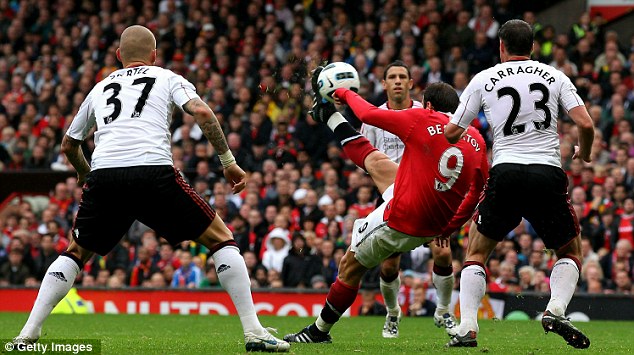 Monday night at Old Trafford was the venue for the crowning of the new Champions for the 20th time. The fat lady was able to loosen her vocal chords thanks to a breathtaking hat-trick from the man who has been the seismic factor in us regaining our title.

Robin Van Persie’s opening 30 minute blitzkreig on the brittle and youthful Aston Villa defence was the fitting outcome, number 20 sealed our number 20 in some style. Each strike was taken with aplomb and icy-veined composure. The Dutchman’s triple was the 221st hat-trick registered by  a Manchester United player (as well as Newton Heath) in all competitions.

Van Persie’s demolition job was his fifth Premier League hat-trick and second for United (the other being an inspired performance away at Southampton, where he snatched victory in the dying embers). His latest hat-trick included a whirlwind volley sandwiched in between two more regulation goals, which Sir Alex described as the ‘goal of the century’. They have already got the tee-shirts printed of that goal. It was spell-binding, the sort of magic £24M gets you. Van Persie’s league tally has come up to £1M per goal, that is value if you ask me after a debut season.

Before people offer alternative suggestions to the shortlist of hat-tricks coming up, I acknowledged that it is virtually impossible for everyone to be in accordance and everyone has their own preferred type of goal and player. As a result, rather than delving into the impossibility of concretely stating what were the ‘best’ hat-tricks, I have selected five of the more memorable hat-tricks. The ones that are ingrained into our minds and we can relate to immediately and rejoice.

So sit back and enjoy five of the more memorable domestic hat-tricks we’ve been privileged to take in following United:

Nothing is better than kicking a blue or 11 of them. In front of the cameras, the flying Russian winger demolished City’s defence in a performance that was typically Kanchelskis- pace, trickery and an eye for goal.

Our treble season was notorious for our dynamite striking quartet. So when Ole replaced Dwight Yorke with the game won, few could have foreseen the impact the babyfaced assassin would make  on the game. Every chance Solskjaer had, he buried- typical. He notched 4 goals in the space of no time and made the scoreline thoroughly torturous for Forest.

Talk about introducing yourself to your new fans, this was a dream debut for the 18 year old Scouser. It was clear from this early stage that Rooney relished the big occasion and the limelight and that we had someone special on our hands. A crisp left-footed one-on-one finish into the top corner, a drilled right-footer across goal and a glorious Beckham-esque free-kick crowned a scintillating debut and was only the start. The first of his 400 appearances to date was truly unforgettable.

The Bulgarian found himself to be the expensive marmite during his 5 years at United. Some thought he was genius, others lazy. He showed his class and endeared himself to the United faithful for a long time to come with this brilliant triple against Liverpool. 2 headers started and ended the scoring, but the overhead kick off the crossbar in between was artistry and memorable. That goal was only bettered by Rooney’s overhead pearler against City, but this day was Berbatov’s zenith in a United shirt. It was Berbasex.

Our number 20 was on the receiving end of a thumping from his future employers and notably his future chief tormentor in Rooney. A penalty crowned off his hat-trick but the two free-kicks he stuck past their keeper were magic, the second one in particular, in which he did the keeper with the eyes and placed it across him leaving him stranded was fantastic. At the time we were scoring for fun and looking unbeatable, this game also saw brilliant goals from Ashley Young and Nani. Van Persie clearly liked what he saw despite the scoreline!

Others to not forget:

Man Utd 9-0 Ipswich 4th March 1995 (Andy Cole scores 5, a record at the time he now shares with Shearer and Berbatov)

Man Utd 4-0 Norwich 2nd March 2013 (Shinji Kagawa comes of age in a United shirt and shows us what is to come with 3 nonchalant, cool finishes).

Which was your favourite?