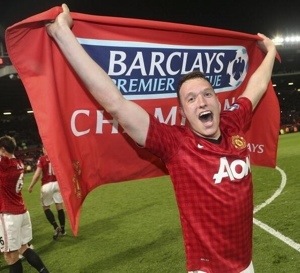 Since the Manchester derby defeat at Old Trafford two weeks ago, social media websites have been flooded with images of Phil Jones’ facial expressions. The elastic muscles in his face seem to be an obsession of many, especially City fans.

I find it all very weird. It’s such an odd thing to obsess over. Jones’ performance against City, however, was something that held more importance yet was ignored by those too busy tweeting pictures of their Phil Jones face. He was brilliant at centre back and Gary Neville was right to single him out after the game.

Last night we secured the title and Jones was arguably the best player on the pitch. You can see he enjoys playing at the heart of defence. Ferguson was quick to path Jones’ back at full time as he won his first major honour at the club.

“Jones, arguably the way he is looking, could be our best ever player,” he said. “I think Jones may be one of the best players we have ever had, not matter where we play him. At 21 years of age, he is going to be a phenomenal player. I think he can play anywhere on the pitch. He has such a massive influence, with his instinct and reading of the game. He has a drive about him.”

How does his face look now? Better than ever. Champions.