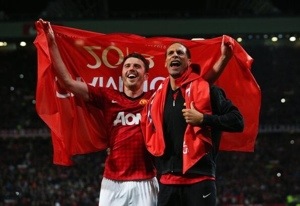 Like the rest of us, Michael Carrick has run out of words to describe the achievements of Ryan Giggs. The Manchester United legend has now won as many league titles as Arsenal have in their entire history.

At 39, Giggs has 13 league titles to his name following last night’s win over Aston Villa at Old Trafford. Listening to him interviewed by Sky Sports last night, I got the impression he has no plans to hang the boots. Giggs is a winner and wants more having already signed a one-year contract extension.

Who could blame him? The feeling of success never gets old. Carrick has now won the Premier League five times in the seven years at the club. He believes it gets more special.

“It is an incredible achievement,” Carrick said. “Every year we win it just gets more special. The sense of achievement gets greater, for the manager and the club. This was a special one this year, the way we ended last year. We could have gone two ways and let it affect us and faded away. But we bounced back. We are proud of all the lads for showing their character. We were written off at the start of the season, as we are most seasons, but we have managed to come out on top. It is a special feeling.”

As for Giggs, it’s a phenomenal achievement to have won the league so many times.

Carrick continued: “I keep talking about him but what else is there left to say? It is sensational that he is still able to do that after all this time. It is not just physical, it is mental, having the drive and desire to do it every day. The league wasn’t won tonight, it was won all season with all the work we have put in. Ryan is out there training every day. The standard he has set is unbelievable. He is a legend. It is a throwaway comment too often. But he is the legend really. It is a pleasure to play with him and work with him every day.”