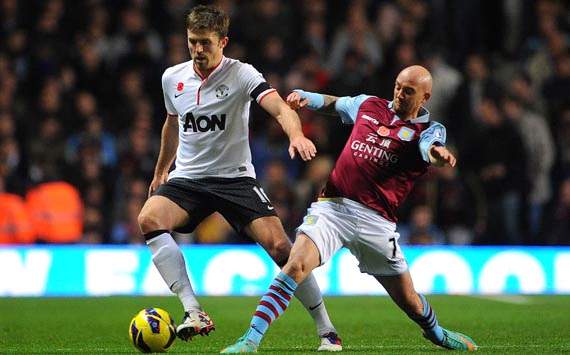 On Monday night we face Aston Villa at Old Trafford in attempt to gain three points and come closer to clinching the Premier League title. Sean Kilgallon, who is currently on a placement at The Times, joins me to talk about issues concerning his club.

The obvious spring to mind, the likes of Benteke, Weimann, Lowton and Guzan have all impressed this season. Although Benteke’s performances have exceeded everyone’s expectations. Nathan Baker is another whose really matured this season under Lambert, putting his body on the line on numerous occasions.

Both Darren Bent and Stephen Ireland have disappointed since Paul Lambert took charge, with both struggling after falling out of favour. Joe Bennett is another that fails to fill me with confidence with some seriously lightweight performances.

Yes. Stoke could still find themselves in the bottom three, although in my opinion, the last relegation spot is between Villa, Sunderland, Stoke and Wigan. If we can get three points at home to Sunderland and avoid defeat on the last day at Wigan, we’ll stay up.

Is Randy Lerner popular with the fans?

Ever since ‘that’ decision to appoint Alex McLeish two summers ago, Villa fans can’t help but feel that his ownership at the club has been slightly tainted. The glory years under O’Neill were fantastic, but that kind of spending was never going to be sustained. Despite some strange decisions over the years, Lerner has pumped some serious money into the club, although more is definitely welcome providing we stay up.

How are you finding Paul Lambert as manager?

It could be worse, 12 months ago it was much much worse. He’s very much a disciplinarian, just as he was as a player. Players such as Darren Bent and Stephen Ireland seem to be struggling to come to grips with his style of management. It’s easy to label this season a transitional period, it’s next season that will really count, as long as we’re still a Premier League side.

The infamous club of my generation. Everything, from the squad to Sir Alex oozes success, as it has done since the treble winning side of 1999. Despite being on the receiving end of some sensational comebacks over the last few years, United remain a class act.

When you take a look at previous Villa managers, Alex McLeish has the worst win percentage in history with Billy McNeill not too far off. What was like hearing your club appointed a man that previously managed rivals Birmingham City?

Devastating. Not one Villa fan would have been pleased with the appointment, most would prefer to write off the year and pretend it never happened. Looking back on it now, it’s unbelievable that Randy Lerner made the decision to appoint McLeish, particularly with the dreadful style of football associated with the Scotsman.

If you had to take any player from United to Villa, who would that be and why?

Automatically, Robin Van Persie comes to mind after the strikers past 24 months. But Wayne Rooney would prove much more effective playing off Benteke in my opinion. Michael Carrick would definitely add some quality to the midfield. But for me, Rooney in the number 10 role.