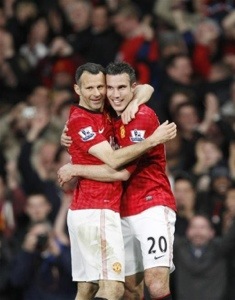 David de Gea: Largely untroubled for most parts in a dominant performance from the new champions. Despite spilling a second-half cross (uncharacteristically these days), he produced a stunning tip over from El Ahmadi’s long-range effort. This season has been a coming of age for the Spaniard, now a title winner he will only go onto achieve great things. 7/10

Rafael da Silva: Got forward with typical verve, provided cross for Giggs to set up Van Persie’s early opener. Distribution was wasteful at times in the second half but continued to support Valencia with the game in the bag. 6/10

Phil Jones: Looked like he had played at centre-back for the majority of the season after tonight’s outing. Stood up to the aerial threat of Benteke, crunched into tackles in typical fashion and often carried the ball out of the back with consummate ease. His first major honour will be a huge confidence booster for the 21 year-old. He has a big future in whatever positions he eventually nails down, on tonight’s evidence it will be centre-back. 7/10

Patrice Evra: Was in the mood for attacking as is customary, but was exposed a couple of times as a result. Cyncially brought down N’Zogbia fr a booking and made a couple of mis-timed tackles after that. That said, he shackelled Weimann and Lowton pretty well. 6/10

Antonio Valencia: One of our best outlets tonight, Valencia looked like the Ecuadorian of old, relished taking on his full-back and provided menacing crosses. Looked like confidence was creeping back into his game, something that was desperately needed, Valencia had a very good game. 7/10

Michael Carrick: Economical and tidy is a given for the Geordie. Showed why he is on the shortlist for Player of the Year by dealing in his bread and butter- ball retention and crisp, accurate passing. Hard to believe that Carrick is only recently grabbing the plaudits he deserves, his performances have been high-quality all campaign. 7/10

Shinji Kagawa: Getting better and better with each game. His balance, poise and vision are a combination that is a joy to watch when he is in full-flow. Sir Alex says we will be entertained with the real Kagawa next year, we have already been treated to some sublime snippets of what is to come. First English winner’s medal will only inspire him to push on in the years to come. 7/10

Ryan Giggs: At the forefront of everything good about the display. Supplier of two assists for Van Persie, including a very unselfish favour for the third goal. Tormented Lowton at times with the trickery and guile he has made a career out of. Now the holder of a staggering 13 Premier League winners medals and with no sign of let up or deterioration, Giggs is still a joy to behold. 8/10

Wayne Rooney: Deployed in the recent deeper role, Rooney, although looking like he would want to further up the pitch, delivered a good performance in there again. The ball to tee up Van Perise’s sensational volley was sublime, their rapport and linkup has been dreamy at times, that example of one of the best. Once again substitued though, and did not look happy about it. 7/10

Robin van Persie: Surely his surname is a typo? The Dutchman has been close to perfect this season and how fitting that our magic number 20 secured our 20th title with a phenomenal hat-trick. The first was a tap-in from a Giggs centre, the second was that volley (there is something about Dutch players and volleys- Van Basten) and the hat-trick was a rounding of the keeper before lashing past the 4 Villa defenders on the line via the post. His touch and balance and of course his finishing have been the difference. It is still so surreal that we possess this player of sheer class. Idolised by so many, he has now ended 7 years of trophy hurt. He has been Robin Van Perfect. 9/10