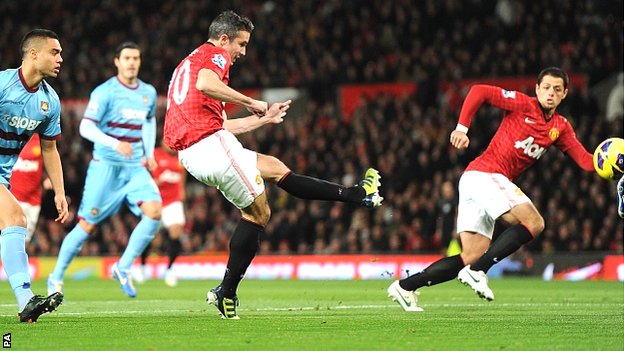 Before Manchester United’s 2-0 win at the Britannia Stadium, we lost two games in a row against Chelsea and City. Tonight’s game is of real importance to show we’re back on track and ready to take back our Premier League trophy.

Despite having a handy Monday night fixture lurking on the horizon, it’s crucial we gain momentum tonight, and race towards the Premier League finish line. We know Upton Park is far from the easiest ground in the league to visit. Since the Premier League began in 1992, for instance, United have won 22 out of 33 games against West Ham.

In terms of the team I reckon Ferguson will go for something similar to what beat Stoke City last Sunday. An attack minded line-up to get the job done but he might make a few changes seen as the next fixture will be just 5 days later.

As long as he doesn’t select Giggs centrally, it will look good to me. It’s not as if we’re stuck in the area therefore need to play 39-year-old’s out of position. They’re guys sitting on the bench that are more than capable of contributing straight away. Cleverley alongside Carrick usually works well, but Fergie might fancy Rooney playing deep again.

At the back Rafael da Silva should come back in for Phil Jones. The Brazilian has been magnificent this season and was rested last weekend. Either Nemanja Vidic or Rio Ferdinand will be benched. They have become of age that playing week-in week-out is no longer feasible. Saying that, Ferguson may play them and juggle between the Villa fixture.

Seen as I expect us the line-up similarly to how we did against Stoke, I can not see much of a difference in the way we approach the game. We came out and attacked early, scoring after 4 minutes, but got slightly complacent afterwards. That shouldn’t be the case against West Ham though. The manager will want the job done as soon as possible, but knowing United we rarely do things the easy way. It’s one of our biggest problems, scoring early and relaxing which just invites pressure.

Come on you reds!