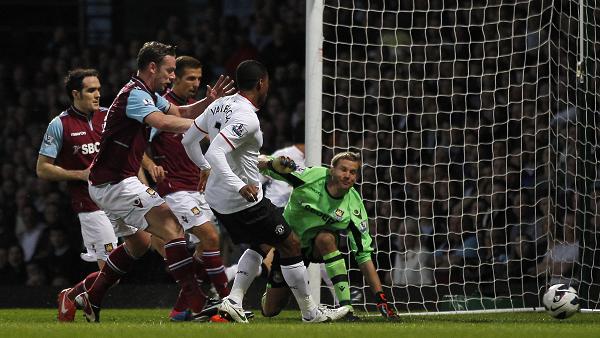 David de Gea: Couldn’t do much with both goals. Coped pretty well with the physical presence of Andy Carroll, despite being on the end of some fearsome challenges. 6/10

Nemanja Vidic: Stood up to everything Andy Carroll subjected him to, making some fantastic defensive headers in combating their direct approach. 7/10

Rio Ferdinand: On his return to Upton Park, was easily outpaced by Matt Jarvis for the opening goal. Calmness personified as per usual with his distribution into midfield. 6/10

Patrice Evra: Second best in the mis-match with Andy Carroll for the opening goal. Got forward when possible to provide width with Kagawa preferring to play in-field. 6/10

Antonio Valencia: Notched his first goal of the season with a simple tap in. Still not the Valencia of old, but still created problems. His service was hit and miss throughout the match. 7/10

Michael Carrick: Sometimes not his meticulous self- gave away the ball on occasion, but mostly neat and tidy. 7/10

Phil Jones: Wholehearted performance as we have come to expect from the youngster. Missed a glorious chance to give United the lead early in the second half from a van Persie knock down. Showed his versatility in playing centre midfield, a week after playing centre back against City, and right back against Stoke. 6/10

Shinji Kagawa: Bright and busy, showed calmness in the box and skill to provide Valencia’s equaliser, then struck both posts with a rasping effort from the edge of the box, from which van Persie equalised. Will see his best next season, but he’s already shown what is to come this season. 8/10

Wayne Rooney: Questions were asked as to whether he could play centre midfield, days after running the show against Stoke, he was below standard. Had a good chance to equalise which was cleared off the line; maybe an in from Rooney would have buried it. Substituted for Giggs. An off night. 5/10

Javier Hernandez: His pace stretched the opposition defence, had one header saved by Jaaskelainen. Didn’t have enough time on the pitch to make much of an impact. 5/10