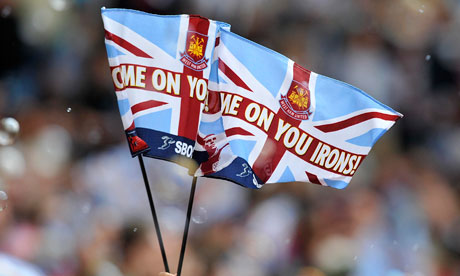 I caught up with Jacob Steinberg this week to get his thoughts on West Ham ahead of our Wednesday night clash at Upton Park.

To be honest, most players have impressed this season, although Winston Reid has probably been our best player. He was awful in his first season for us but has come on leaps and bounds since then. You’ll probably have heard lots about Momo Diame, who has been very good, while Andy Carroll has shown what he can do when he’s fit. Disappointments? I’m not sure if it’s possible to be disappointed by Marouane Chamakh – but I’m fairly sure we won’t be making his loan move permanent. Also Modibo Maiga arrived for £4.5m in the summer and although he’s scored a few, including the third in our win over Chelsea, he’s not really made much of an impact.

Can you see West Ham finishing in the top 10?

Maybe, but probably not.

Are owners Sullivan and Gold popular with the fans?

They weren’t at first – hiring Avram Grant ensured we went down – but they’ve put money into the club, backed Allardyce and secured the Olympic Stadium.

How are you finding Sam Allardyce as manager?

I like him. He clearly knows what he’s doing, he’s turned us into a resilient outfit and we’re no longer a soft touch; how many West Ham sides in the past would have gone to Anfield and got a point or stormed back from a goal down to beat Chelsea 3-1? At home we’ve been really good and our four defeats there have been to late goals by Arsenal, Everton, Liverpool and Tottenham. We were winning in each game. No one has enjoyed coming to Upton Park this season. The problem has been the away form though. I’m not quite sure why there has been such a difference on our travels but we have only scored 10 goals and won three games. We’re a bit too cautious sometimes.

The team is weird. There are times, such as when you lost to Norwich, when you want to write them off completely. But I went to the first leg of the Real Madrid game at the Bernabeu and came away extremely expressed with them. The midfield’s not right though and the wingers have been in horrible form, haven’t they? Van Persie’s the difference though. And the manager. What’s there to say that hasn’t been said already about Ferguson? If you put someone else in charge of this side, I very much doubt they’d be 15 points clear. I’ll give United fans this – probably the loudest away support in the country. But please don’t sing that Carrick song all night. I had it in my head for days after the QPR game in February.

Thoughts on West Ham’s move to the Olympic Stadium?

Cautiously all for it. In theory, it should give us a chance to compete at a higher level. As much as there are concerns over whether we’ll sell out and also about leaving Upton Park, it’s a chance we had to take.

If you had to take any player from United to West Ham, who would that be and why?

I could see another 2-2, like in the Cup in January.

Steinberg is a football writer for The Guardian. Follow him on Twitter – @JacobSteinberg. SN would like to thank him for taking the time to answer our questions.

One response to “View From The Enemy: West Ham fan on the Olympic Stadium, Allardyce and Manchester United’s brilliant away support”