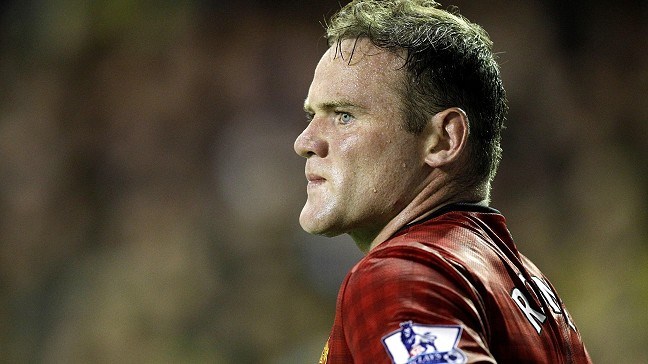 With the euphoria levels about the rumoured potential arrival of Colombian goal-scoring machine Radamel Falcao reaching overdrive, inevitable questions that crop up on a frequent basis surrounding the future of Wayne Rooney reared their head once again last week. Yesterday though, we maybe got some answers to those persistent uncertainties.

Deployed in the class no.10 role (one that Rooney is accustomed to playing in) against Stoke yesterday, Rooney ran the show and showed signs that he was coming back to the sizzling form we all know he is more than capable of producing.

The manager hinted that Rooney was utilised in this deeper role to give him the confidence boost needed to kick-start a run which will hopefully lead to a purple patch. Ferguson admitted that Rooney’s form of late has not been of the standards he has previously set, leading to the obvious speculations from media outlets that Rooney was on the decline, was his long-term future secure with us, is his heart in it?

Ferguson’s insistence on playing Rooney deeper reaped the rewards and will surely have given the Scouser the confidence boost that everyone craves for him. He was given freedom to drift and had license to interchange and swap positions, often coming deep to collect the ball from the defence and launch the springboard to attack.

Despite the inclusion of Antonio Valencia, as I predicted in my last piece, we altered the formation and did not setup with out and out wingers. Most of the width was provided by the attacking intent of our full-backs Phil Jones and Patrice Evra. Shinji Kagawa, although featuring on the left side, was at his best when he came narrow to get involved in the play with his vision, movement and balance all on show, allowing Evra to bomb forward on numerous occasions, not that he needs a second invitation to go forward does Evra.

In short, the the 4-2-3-1 formation allowed flexibility and variety, which brought the best out of Rooney- the Stoke defenders had no idea who to pick up, particularly as Chicharito’s pace stretched their defence further- allowing Rooney, Carrick and Kagawa to freely play their passes at will.

Rooney is no stranger to playing in behind the main striker or even deeper still- he was used as the deep lying playmaker in a dead rubber against Cluj earlier in the season. His boyish enthusiasm in his earlier days meant he’d tear all over the pitch to collect possession when were telling him to save his energies for in and around the penalty area. Yesterday we saw examples of him sharing Michael Carrick’s bread of butter of collecting the ball out of defence and pinging the passes into the likes of Van Persie et al. This was illustrated with Rooney’s ball to Van Persie which resulted in the Dutchman’s fancy footwork to win the penalty which sealed the game.

Rooney has the technical ability and playmaking capabilities to excel in the role if this is where his long-term position is. He could feasibly turn himself into the archetypal Scholes or Lampard, who arrives late in the box to get on the end of service. Hopefully Wayne still has a few more years at the top level playing further forward before maybe dropping deeper. He certainly has more to offer further up the pitch than to already become a deep lying distributor.

So, in the event we secure the coup of Falcao, if Rooney’s long-term future is with us, we saw first-hand yesterday where he might produce the goods. Not a bad prospect is it?