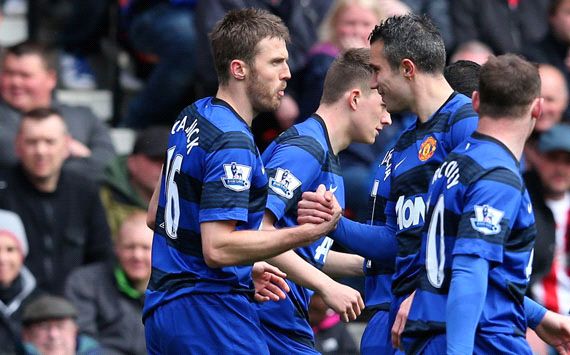 David de Gea: Hardly given the aerial bombardment people were anticipating and a virtually spectator. Only action was to superbly claw out a Charlie Adam free-kick that bounced in front of him awkwardly. 6/10

Phil Jones: Showed his versatility at full-back after his excellent display at centre-back on Monday. Dealt adeptly with their direct game and often gave good support to Antonio Valencia. 6/10

Rio Ferdinand: Him and Vidic were hardly tested at the centre of defence. Was able to carry the ball out of defence and look as composed as ever. 7/10

Nemanja Vidic: Saved for today’s more physical encounter than the derby, Vidic was tailor-made for their direct approach. Ensured Kenwyne Jones was feeding off scraps. Dominated the physical battle with him. 7/10

Patrice Evra: Easily dealt with Ryan Shotton and caused him and Geoff Cameron a few problems going the other way too. Missed a good opportunity from a pre-planned routine from a Van Persie corner. Still a very good attacking outlet on the left. 7/10

Michael Carrick: Notched his first goal since January 2012 with a clever stabbed finish past Begovic from a Van Persie corner in the 4th minute. He is always a steady head in midfield, and looked as classy and composed as ever. Rarely wasted a ball. 8/10

Shinji Kagawa: Looked bright and breezy in possession, he provided the guile and craft. Excellent balance and his movement caused problems. Drifted in and out of the game. Much to build on though. 6/10

Antonio Valencia: Responded after his comments post-City match with a bustling, hard-working display. His end product was a little disappointing but the effort was there. Still not the Valencia in full-flow though. 6/10

Wayne Rooney: Deployed in a central midfield role, he looked the part. Intricate passing, deft flicks, much like Carrick he seldom gave the ball away. Played the pass for Van Persie to win the penalty. Rooney looked like he was getting his confidence back. Looked a natural in the deeper role. 8/10 MOTM

Robin Van Persie: Provided the corner which resulted in Carrick’s opener. Showed beautiful skill to fox their defender who had to bring him down. The resulting penalty was unerringly accurate, despite the ball moving due to the gusts of wind. His celebrations with fans and the manager emphasised the relief from all concerned. With that monkey off his back, he played with freedom and re-found confidence. Class act as ever. 8/10

Chicharito: Given first league start in two months, caused Shawcross problems with movement and pace (so much so he had to use illegal means to stop him). Didn’t really get that many opportunities, but worked tirelessly before being replaced. 6/10

Danny Welbeck: Hernandez’s replacement didn’t really make much of an impact with a quarter of an hour left. 5/10