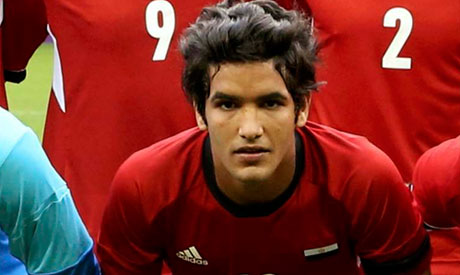 ENPPI and Egypt international Saleh Gomaa claims he has been offered a trial at Manchester United. Egyptian football website King Fut analyse the potential transfer and profile the highly-rated midfielder.

The 19-year-old deep lying midfielder is rated as one of the hottest prospects in African football after winning the MVP at the African Under-20 championship last month, as the Young Pharaohs won the tournament in Algeria. Overall Gomaa scored twice and assisted once in the four games he played in the youth tournament, both from the spot, including the penalty that saw Egypt draw 1-1 in the final with Ghana. He then scored from the spot again in the following shoot-out as Egypt won the trophy after beating the Black Satellites 5-4 on penalties. Gomaa’s leadership, composure and maturity displayed at the tournament caught the attention of scouts from top European clubs including Manchester United, according to the player.

“I have been followed by a number of scouts, including two from Granada and Manchester United. The Manchester United scout inquired about the possibility of having a trial with the club and he also asked me about ENPPI’s readiness for a potential transfer.”

According to talkSPORT, Liverpool have also entered the ‘chase’ for Saleh Gomaa.

Saleh Gomaa, often touted as the ‘Egyptian Andres Iniesta’, is currently the youngest player in Bob Bradley’s Egypt national team and he else held the same title in Hany Ramzy’s squad when he represented Egypt at the 2012 London Olympics. In just a matter of one year, Gomaa has represented Egypt for the U20, U23, and the first team squad.

Gomaa appeared competitively for the first time in 2011 when he was promoted ENPPI’s first team. ENPPI are well known for their reputable youth academy, new gems shine year after year from this petroleum-owned club. Ramzy himself acted as their assistant manager from the period of 2005-2008 under German Rainer Zobel before taking charge of the first team.

On the 13th of March 2011, Gomaa made his Egyptian Premier League debut against El-Gouna at the raw age of 17 years and 8 months old. Later that year, Saleh Gomaa was called up to Egypt’s U20 national team for the 2011 FIFA U20 World Cup in Columbia. Despite only participating in a mere 46 minutes in 3 matches due to a slight injury he picked up before the tournament, Gomaa managed to win a penalty against Argentina – Egypt’s only goal in that game.

Gomaa continued to prove his caliber when he represented the national team in a 2011 African Cup of Nations qualifier against Niger – following EFA’s decision to field the U23 squad after Hassan Shehata’s resignation. Bob Bradley was in the stands and was expected to take control right after the game, so it was a good chance for the American to scout the young talents. Gomaa entered the pitch on the 69th minute, and marked his national team debut with an assist to Marwan Mohsen just 2 minutes later!

March 2012, the U20, U23 and national team head coaches were all fighting over who should take the promising central midfielder to their camp. Bob Bradley wanted Gomaa for the 2012 African Cup of Nations qualifier, Ramzy for preparations for the London 2012 Olympics, and U20 head coach Rabie Yassien for a friendly tournament for North African nations!

Gomaa was a key player for the Egyptian team at the CAF U23 Championship in Morocco. His quickness, vision and precise strikes from distance cemented his spot in the starting eleven. Saleh played over 292 minutes in a total of 4 matches and scored the all important second goal against Senegal which sealed Egypt’s qualification to the London 2012 Olympics. This year he has been a regular with the national team, but has yet to feature in a competitive fixture.