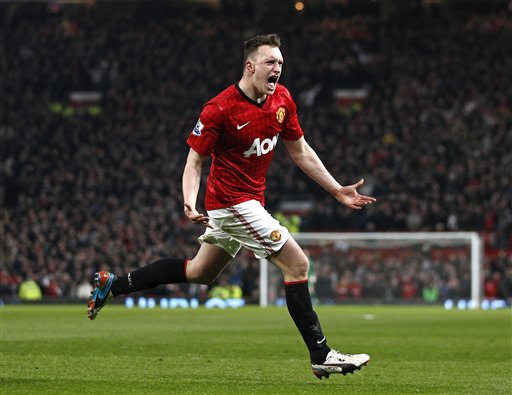 Under normal circumstances, not much good comes from mulling over a derby defeat to that lot. The opportunity to open up a humungous 18 point lead was squandered, meaning any premature talk of wrapping up the title had to put be delayed for the time being. However, there was one man wearing red who could hold his head high after an immense performance in an otherwise collectively second-best display.

The ‘utility man’ tag is one of the most unfortunate labels in football. One where being the jack of all trades, master of none is an ill-fated malaise. John O’Shea and Phil Neville will hold you down to the fact that not having a concrete position and permanent role in the team probably hindered their careers.

Last night’s star performer for United Phil Jones has played in a variety of positions in his 2 years with the club. Last year, he made a seamless transition and seismically rose from the mire surrounding his previous club Blackburn Rovers to challenging at the elite opposite spectrum with us. He initially wooed fans with some sterling displays at right-back, even drawing comparisons to the legendary Duncan Edwards and Franco Baresi. Due to a horrendous injury backlog, Jones spent most of the winter schedule adding bite to our midfield, suggestions that we had the next Roy Keane on our hands were transcending rapidly. Ironically, he spent the least amount of time plying his trade at centre-back, the position where he made his name and came to prominence at Ewood Park.

Long story short, Jones took the utility mantle that O’Shea had passed to him, failing to nail down a permanent slot. Jones is surely too good a player to be held down to this tag. That said, a week after standing alongside Michael Carrick at Stamford Bridge, he was charged with nullifying waste disposer Tevez at centre-back alongside Rio Ferdinand. His debut for Blackburn was against none other than the brute they call Drogba, he took the man of the match award and hit the Ivorian hard with some fearsome tackling. Last night’s display evoked that first professional appearance.

The dynamics of a derby game are self-explanatory, if what was required needed to be sounded out to the players then why are they there? This game was like those that had gone previous- end to end, unrelenting, every tackle meant something more. We saw from Jones’ shushing of the Emptyhad crowd when we triumphed 3-2 that he didn’t need telling of the importance. Apparently Jones is subject to ridicule from their fans for not being a flashy signing and expensive for an Englishman (how is Scott Sinclair doing by the way?), his performance last night made them look foolish.

He was always in the right place, making umpteen clearances, going into every tackle with bite and vigour- leaving his mark on a few players along the way. Jones may not be the most appeasing player on the eye, but he is a throwback to how proper football was, when the school of hard knocks was as good an education as any. Jones was used to fighting for everything in a relegation battle with Blackburn, that ethic has served him in good stead even with us. As a result, his game is based around sheer determination and physical qualities, even though our goal will go down as a Kompany OG, the determination to get into the position and get there first was fitting of the occasion and his overall performance. A derby game is an occasion for the whole-hearted; Jones was stretching every sinew for the red half of Manchester.

For a 21 year old, his maturity belies the young shoulders and youngster status. This combined with his will to win as justifiably had him earmarked as a potential future England captain. When put in front of the press last night, Jones was adamant that this was just a blip: ‘We’ll get on the training pitch and do what we do best, recover and we will. We’re still in a fantastic position and the boys deserve credit for that’.

Which position Jones nails down as a United player remains to be seen, it is not a criticism that he has thus far not found a niche position with us, as he is excelling in whatever role he is assigned.

One thing is certain though, Jones gives everything for the cause and we have a player who could go onto be anything he wants to be over the next few years.

One response to “There’s something special about Jonesy”