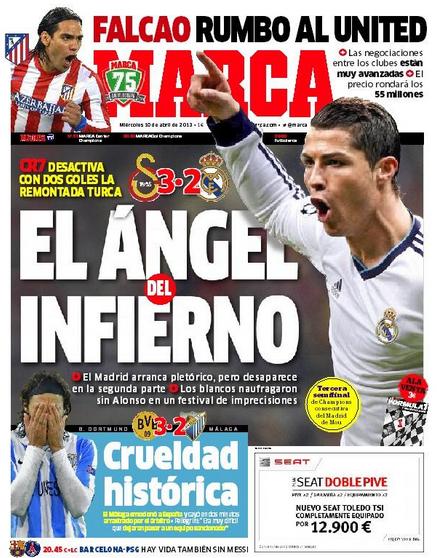 Twitter went into what can only be described as meltdown following a breaking story released by Marca this morning. It would normally take something ground-breaking to get as much publicity as the fallout to Real Madrid’s Champions League progression, and the rumour linking deadly Colombian striker Radamel Falcao with a potential move to us certainly achieved this.

For those unfamiliar with the Spanish media, Marca is a Madrid based paper, with the sole focuses on their two footballing teams – Real and Atletico, Falcao’s current employers.

The Falcao story was front page news, the headline they went with translated as ‘Falcao – one step from United’. Marca have been well-known in the past for sensationalising stories, but also have been prone previously to deliver breaking transfer news regarding their teams – the Cristiano Ronaldo world record transfer springs to mind as Marca played their games but in the end Real got their man.

Falcao has gone from being a very capable striker in his FC Porto days to become arguably the hottest striking property on the world stage. He is arguably the deadliest No.9 out there, give him a chance in the box and it invariably ends up in the onion bag.

So the prospect of us even lodging a bid for the Colombian hotshot comes as a serious signal of intent. We would undoubtedly have to smash our record signing fee to even come close to getting Atletico to bring their executives to the negotiating table. This is a striker who has been rivalling Cristiano Ronaldo and Lionel Messi and almost matching them stride for stride in terms of goal-scoring. He is playing and holding his own against these two footballing supermen.

That said, is the signing of Falcao a realistic one or a necessity? From a financial viewpoint, it may not look the most viable or prudent bit of business at a first glance. Atletico would drive a Daniel Levy-esque hard bargain considering he is their shining star and their most prized asset. However, with a rebranding of our Carrington training complex (a new mega deal with current sponsors AON) it seems likely that if we will be in the market for at least one marquee signing this summer, the revenue generated from this freshly broke deal would surely tie in with this season’s allocated transfer kitty.

From a football perspective, we would be securing more guaranteed goals. Just take a moment to reflect on a potential front-line of Van Persie, Falcao, Rooney et al. That is something only achievable on Football Manager, so if we were to secure a deal it would be a truly mouth-watering prospect. Of course, if we added another striker to our already well-stocked attacking arsenal, that would surely come with implications and maybe an outgoing. Part of the territory that comes with Wayne Rooney is unrelenting media hype and speculation, with it coming up to a pivotal stage in his United career in terms of performance and contractual position, an interesting summer lies ahead for the Liverpudlian. If Falcao arrived, there would be yet more column inches on his position in the United setup. Earlier on in the campaign, Chicharito was linked with Atletico as Falcao’s replacement (when he was linked with Chelsea and City). Chicharito, like Falcao, is a natural scorer and would surely be linked with them again. We would be loathed to lose such a prolific talisman, but if another arrived that would ease the disappointment.

Marca, in their report, went as far to suggest that we already have a down payment in place to secure the Colombian’s services. This, alongside Atletico’s silent stance on the talk, only heightened speculation and led many to believe that there are semblances of substance in the rumours.

The fact that we have been linked with such the jewel in the Atletico crown goes to suggest that, contrary to popular belief, our financial circumstances are not as gloomy as before. The debt is easing and our revenue and commerce continues to flourish, this combined with success on the pitch has its economic rewards meaning that we are in a position to still attract the biggest names around.

The world has stood up and acknowledged Falcao’s stunning goal return this year- particularly when he destroyed Chelsea in the Super Cup scoring a dazzling hat-trick. If we could sign him, then it represent a monstrous signal of intent and of course it would mean that title rivals City and Chelsea missed out on his signature.

Before people jump to the conclusion that this story is another Marca classic and that we don’t have a chance of signing Falcao, it should be noted that Falcao’s agent is the well-known Jorge Mendes, who has dealt with United in the past in delivering us Cristiano Ronaldo, Nani and Bebe amongst others. He has history with Sir Alex Ferguson and it would not be surprising at all if he brokered another monumental transfer involving Manchester United.

In David Gill’s final year here, bringing us the deadliest striker on the planet at present would probably give him a more favourable outlook. Whether this Falcao talk is drivel or fact remains to be seen.

Grab the popcorn, this summer’s transfer window might just be as gripping as the last one.

2 responses to “Falcao to United – Tabloid nonsense or distinct possibility?”