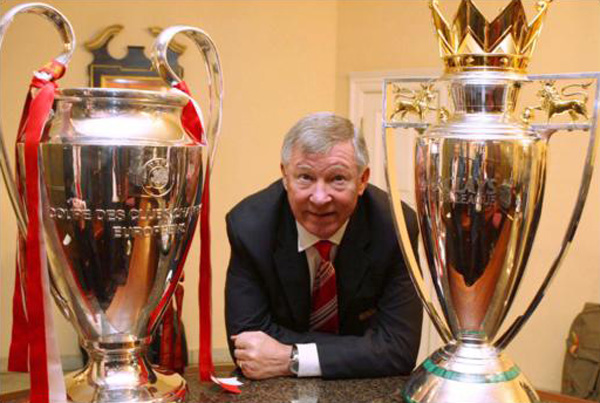 Fairy-tale is often used in football as an expression of a story so perfect it could easily have been crafted by a classic writer. It’s defined as a fanciful story with heroic deeds, magical events and mystical characters.

Using this definition it is easy to see how so many of Manchester United’s triumphs have been paired with these fantasies…The glory of the treble, the divine intervention in Moscow, the phoenix from the flames in 1968 and many more in between.

But despite being on the cusp of a record-breaking league title victory, it is hard to class 2012/13 as fairy-tale…or is it?

As we stand on the brink of the derby that was supposed to be this year’s incarnation of last season’s Etihad decider, United are 15 points clear – anyone who predicted that when the fixtures emerged in June definitely does read too much Lewis Carroll! – It’s a huge accomplishment that has seen the Reds become the first side ever to win 25 of their first 30 league games.

But it serves as a perfect illustration that, whilst the footballing archives may be chronicled on paper, just like the greatest fairy-tale, it is the illustrations that provide the magic.

And this season, for most, the pictures don’t quite match the text; that what we have watched since August shouldn’t quite add up to the table before us.

Most reds bemoan the lack of a driving midfield dynamo, some see frailties in defence, others worry about reliance on Van Persie, whilst many pick out weak spots and crave a big-money plug. So with such accepted gaps, and spine-tingling performances few and far between, just how has such a chasm appeared?

And maybe the answer is still in fairy-tale land… sure we may have been a devoid of magic, but in Sir Alex Ferguson there’s certainly a legendary character who’s driven home an ethos so strong, ‘the baddies’ so far, have had no answer.

Because just as Manchester United stands for attractive football and glorious skill, 2012/13 has given prominence to the less revered foundations on which the magic is built.

Arsenal may have youthful exuberance with pace and ability to worry the best on their day; Chelsea may have a side packed with individuals with such creative flair and movement they can send sides dizzy; City may have the midfield physicality, dogged defence and diverse strike force capable of winning any game, but these assets can only come into play if they are working in the optimum conditions.

And it is the flaws that lurk under the surface of these great looking sides that have left them trailing in United’s wake.

In the capital there seems a daily dose of behind the scenes wrangling. From the power struggles at Arsenal that constantly result in the loss of top players, to the totally autocratic and slightly haphazard rule of Ambramovic at Chelsea. The inevitable instability at both clubs has rendered both title challenges impossible.

The biggest threat was always going to come from across the city as Stockport’s finest looked to cement their place as ‘Manchester’s Premier Club TM’.

But what threatened 12 months ago has reared its head in 2013, and hopefully this time there will be no second chances gift-wrapped from Old Trafford.

Mancini’s loose-canon persona, where no player is safe from public criticism has led to a squad of insecure players and a lack of dressing room trust.

And the squad, even minus the, lets face it, comedic adventures, of Mario Balotelli, are a set of individuals who seem most of the time to be completely oblivious to the existence of a situation where they might not be the best option for any given day.

Contrast these clubs with United, who whilst still packed with talent, don’t stand 15-points ahead on ability alone.

But at Old Trafford there exists a culture of respect – an appreciation of teammates so rare you sometimes have to rewind the sky-plus to check you heard correctly.

But yes, Robin van Persie does claim to learn from Danny Welbeck; omitted players do throw themselves into team celebrations, and they do tell you that they know everyone will make a contribution at some point.

This is a spirit that runs deeper than words. Not for United a pre-game huddle for the cameras, this togetherness is in-built. It is demanded by a manager whose position so stable his senior players are his dressing room disciples, not plotting their own glorious takeovers, or aligning themselves with those in power.

These players don’t just play with each other, they play for each other, and they play for an ultimate cause of collective glory – a workmanship that has brought victory from jaws of defeat, and carried the side when ability has failed.

A magical fairy story, maybe not, but still a meaningful fable. Not for the reds a wolf-threatened house of straw or twigs, but one built with bricks of trust, stability, respect and security. Unique aspects that may just propel the dogged, plodding tortoise to victory over the hares.