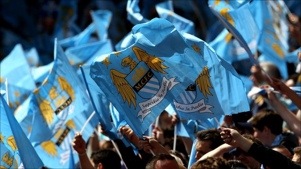 Ahead of the Manchester derby, I caught up with Nayir Chowdhury who writes regularly for Bitter and Blue.

Which players have most impressed and who has disappointed?

– Standout performer has definitely been Nastasic. We didn’t know what to expect of him, and he is quite young so there was no guarantee that he could cut it at the Premier League level, at least not until further developed. But he started the season off very well straight from the start, and has hardly had a poor game since. Most disappointing is probably Nasri. Especially in this season where City’s attack has not firing consistently, Nasri has been non-existent in far too many matches. Aguero has been a bit disappointing with his finishing but everything else has still been in order with him. Just needs the confidence of a goal or two to get started again.

Is the league lost?

– Even on the back of last year’s miracle, I would have to say this season’s PL title is lost. Mathematically we are still in it but I can’t see United dropping enough points for us to get back. As long as we finish out the campaign strong, and maybe grab the FA Cup to go with it, the season will not have been a complete loss.

What do you miss, if anything, about the old Maine Road?

– Given that I am younger, I didn’t have a whole lot to remember Maine Road by, but I can definitely say the larger capacity is missed. It always helps the home side in any stadium when the crowd is larger and the noise is louder.

Who’s the most annoying out of Liam and Noel Gallagher? Both know little about football.

– From what I’ve seen I’d say Noel, because he seems to be more of the happy-go-lucky type. Which isn’t too much of a problem, but Liam has appeared on City’s website in interviews in the past and seems like he might be a bit more connected with the club.

Last season you appeared to be more of a force going forward. What’s happened this season?

– The million dollar question. I think it’s been a combination of a few problems. Firstly, losing Nigel De Jong was a mistake. Though he doesn’t contribute much to attack, he was the shield between the midfield and defense, which allowed our other central midfielders like Yaya Toure the luxury of pressing forward more and having a bit more space to work with. Javi Garcia hasn’t been as good at this, and it has hurt. Another problem has been a simple lack of finishing. Tevez started the season hot but cooled off towards the middle, and Aguero hasn’t found solid form all season. Neither is playing poorly, but rather snatching at the bit when trying to convert chances that they would have made last season.

What do City fans make of those that have started supporting the team since the big takeover and your recent tastes of success?

– I’ll speak from a personal standpoint on this. I don’t like having bandwagoners, and I don’t think any ‘true’ fan of any team likes having them either. Once we were taken over by the Sheikh, however, I knew that if we experienced success the bandwagoners would come, and unfortunately, though it’s not ideal, its necessary for the club as they attempt to move forward in Europe and achieve more success. United’s marketing has been insanely successful, and the revenue brought in by these same types of fans have definitely helped United maintain their status and dominance in England. I just hope that City can do similar things with our new fans.

The Etihad Stadium holds 47,805 yet City struggle to fill it most weeks. Do you think success will gradually fix this issue?

– I think it’s quite the contrary actually, at least in recent years. I know this season City’s average attendance has been something like 46,800 (I don’t have the numbers off hand). Before the takeover, attendance was not as high as this but with success the stadium will fill out. Hopefully this continues to go on an upward trend to the point where we can expand the third tier level of the stands on both ends of the stadium and increase the capacity even more.

It’s funny to see so many bang on about the myth that Mancunians are all blue with Reds being outsiders. Did you grow up with many Reds?

– Having not grown up in Manchester I can’t speak 100% accurately on this but I’m sure this isn’t true. I don’t know if it’s necessarily a 50/50 split in Manchester but to claim that Manchester is all blue or red is laughable. Every city that I have lived in or near that has had multiple teams in the same sport has been fairly close to a 50/50 split of the fans so I’d imagine it’s similar in this case.

– I definitely like the Yaya/Kolo Toure chant that I believe came about this season. It’s got a nice rhythm to it and I like how it doesn’t single out one of the Toure brothers, but keeps them both together. Kolo was definitely a big influence on Yaya coming to City so it’s a nice touch.

If you had to take a player from United to City, who would that be and why?

– I’d probably go with Cleverley. I think he has a tenacity about him that is often times lacking in the City midfield. He’s young, he’s hungry, and he looks like he will have a great future with the England team as well.

Predict the score of the Manchester derby?

– I’m going with a 1-1 draw because I think both defenses will perform well. City’s defense has been very strong all season and I think it will take a moment of brilliance or a scrappy goal from United to break through. The attack looked very sharp last time out against Newcastle and had some of the ‘swagger’ back that we saw a lot of last season, so I’m hoping that will make its way to the pitch on Monday as well. But obviously, United are still the favorites for this one.