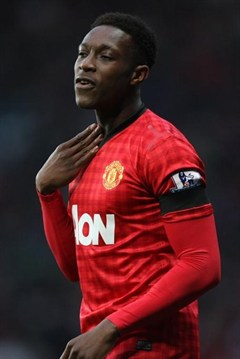 Whenever Wayne Rooney is missing from a Sir Alex Ferguson line-up, World War III almost breaks out. As is customary and standard procedure, the Twitter outcry could probably be heard from the Great Wall of China, media outlets write Rooney’s United obituary no sooner than the manager had handed in his team-sheet. Rooney’s absences against Real Madrid and Chelsea recently, as vivid as they always are, glossed over the richly deserved inclusion of one of our locally picked fruits- Danny Welbeck.

Welbeck’s harshest critics will point to the fact that he sometimes cannot eclipse the silk or grace of a ballet dancer- at times he is not the most aesthetically pleasing footballer on the eye; often looking gangly and awkward with the ball at his feet. They will also allude to the premise that his goal-scoring return for a fully established England international is woeful. They say ‘stats never lie’ but they are more often than not deceptive: of course 2 goals all season for a United striker is unacceptable but in the Longsight man’s case, there have been extenuating circumstances. He has not been playing as a striker, his natural and preferred role. He was never going to realistically get a fair crack in the position he made his breakthrough last year, once we had completely our utopian striking duet of Rooney and Van Persie. Welbeck has been learning the ropes this year in an unfamiliar role on either wing, with a greater insistence on supplying rather than sticking the ball away. He is very much untried in this role, but his game has come on leaps and bounds as a consequence, he has been involved in more link-ups and carrying a greater importance on his young shoulders.

The cheap, clichéd, irritating line ‘not United class’ is one that is muttered all too frequently these days, in this era of immediate and ruthless success, without keeping as equal an eye on the upcoming years. Despite it being a tried and tested formula, young players are seemingly not afforded as much time to hone their skills and apply the necessary tweaks in comparison to yester year. Welbeck announced himself on the biggest stage as a lanky protégé but how! He fizzed in a rocket against Stoke City on his debut in front of the Stretford End, Welbeck said ‘if that feeling was a drug, he’d be dead’.  History speaks for itself at Manchester United, our club is an epitome of a footballing education, and what better school to enrol at to sand off the round edges. Welbeck is in safe hands and on the way to joining that long list of home-made stars.

Manchester United is probably the most challenging club to make a breakthrough at. You need more than just natural talent. Welbeck’s first senior-team locker was next to the world’s best player at the time Cristiano Ronaldo. He could easily have been overawed by sitting alongside this superior specimen, he realised he was sitting next to greatness- something that he was chomping at the bit to emulate himself. Welbeck is made of stern stuff.

There is a brutal foe though in the modern footballing climate: Strikers are assessed purely on goals, people over-indulge on black ink statistics. Rewind twenty or thirty years, there was once a time when boundless industry, relentless endeavour and sopping perspiration were valued just as prestigiously as your name on the score-sheet. In this sense, Welbeck could be considered as a throwback to memory lane, his enterprising nature is playing the lead role whereas his finishing is playing second fiddle- many would love the inverse. With the ever-increasing supply of unsparing ‘analysts’ who only deal in the number crunching and scrupulous footballing dissections, there is little scope for error- nothing goes unnoticed, look how the media have leapt all over Van Persie’s barren spell, the same is equally applicable to even the unfinished articles.

As already touched upon, the numbers regularly only give us fans half an indication of the actuality. Welbeck makes up for his miserly goal return with constant graft and putting in the hard yards- not the most appealing of sacrifices even for those who have been plundering in the goals. So even when a striker is goal-shy, this is what fans expect to see, it is an obvious guarantee for Welbeck, someone who will always give his all for his boyhood club. Numbers though are not gravely significant for anyone still in the process of learning the arts of the trade- we have a player on our hands who will never give a defender a moment’s peace, will always aspire to giving no fewer than the 100% demanded when that red shirt is put on, someone whose link-up play, energy, drive and pace are valuable commodities given the ever-increasing physical rigours of the modern game.

Sir Alex Ferguson has made a few (only a few) errors during his tenure at United, he is a man who for the most part gets his judgement spot on to a tee. Welbeck’s transformation from reserve youth to first-team regular mirrors the story of two present United players: Qualms that lingered over Welbeck were similarly castigated over the shoulders of Jonny Evans and Darren Fletcher on their step-up to the big boys table. Two more players whose grit and resolve are redeeming admirable features, whose hard work got them to where they stand today, it goes to show that more than natural gift is required in the elite echelons of football.

The boss knows how to take care of his younger assets. His eye is not cast merely on the today, but his gaze stretches towards the many tomorrows to come. We are guilty as charged as football fans with our steely obsession with the current.  Right now Welbeck’s goal record may be inadequate, but his stock is rising and he can be rest assured that there will be many tomorrows in a United shirt coming his way. The problem with today’s culture is the merciless media attention thrust upon any fledgling wanting to make the grade. Their every move analysed in microscopic proportions as they are still acclimatising to the cold realisms that being a Manchester United player entails, just look at how De Gea was crucified for his ‘lapses’ earlier in the season. The manager self-recognised the fact that youngsters ‘have to fall before they can walk’, we have to take the bad with the good when it comes to nurturing talent, just look at the transformation of Rafael and De Gea over the past 18 months as testimony to this rule.

The godfather of footballing management would not entrust Welbeck with the heavily burdened tag of ‘big-game player’ without having the unconditional belief that he will become a top player for years to come. Even though the talismanic Rooney was reduced to warming the bench against Real Madrid, Welbeck met the bull by the horns and stretched every sinew for the United cause. His obvious physical qualities are overpowering not just his finishing at present, but are causing untold havoc to defences from the continent and closer to home. Sergio Ramos couldn’t live with him, resorting to dirty tactics. He breezed past Ashley Cole, giving him a tight hamstring. Even though is radar is not perfected as such, he is establishing himself as a key cog in the Ferguson machine.

The future has put egg on faces in the past. ‘You won’t win anything with kids’, ‘come back when you’ve won 19’ have all become a source of great pleasure for us over the years. People tend to forget that Welbeck is far from the finished article, and his finishing and composure will soar as he matures. It’s not like he couldn’t hit a cow’s arse with a banjo- he has scored some great goals for United already (Stoke on debut, Everton last season).

So when people scorn that Welbeck ‘is not United class’ just remember the humble pie that the Kopites and Alan Hansen had to digest, the future can mess up the modern-day assertions.

3 responses to “Why we need to be longsighted over Welbeck”