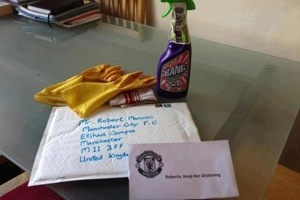 The Premier League table at the minute is a delightful sight. Manchester United are 15 points ahead of City, who are in second, and a 10+ goal difference separates both clubs. With the Manchester derby just around the corner, a win for United will almost destroy the current champions’ chance of retaining the title.

In preparation for the derby on Monday, a Manchester United fan has generously sent City manager Roberto Mancini some goods that may help him keep our trophy glistering until we lift it in May. The gifts are as follows: Cilit Bang polish, rubber gloves and a cloth.

The picture was first brought to my attention on Wednesday when it trended in the UK via Twitter. However, we don’t know who is responsible for the fantastic idea but they certainly deserve a good path on the back.

2 responses to “PICTURE: Roberto Mancini to keep our trophy glistening”