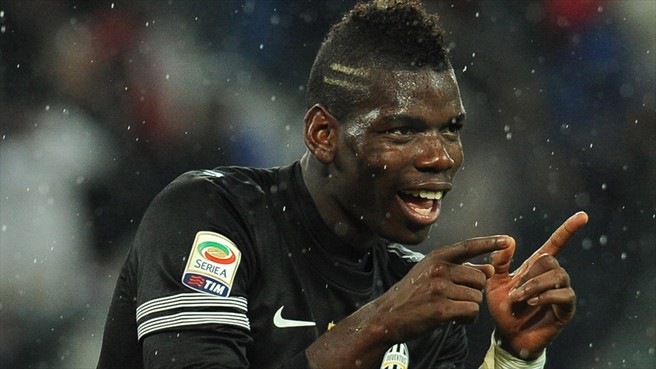 Since joining us back in 2009, Paul Pogba has had a lot said about him. The controversial circumstances in which he joined were not ideal, but did build him up a fair bit, what 16 year old is worth all this trouble?

Two seasons in the youth side followed, and with a string of eye catching performances, Pogba was soon on the fringe of the first team, and at the start of the 11/12 season, was promised first team football, a promise that would be broken, and cause the young man to reject an offer of a contract an leave the club.

Since this event, a lot of United fans are questioning Sir Alex Ferguson’s decision not to play Pogba and keep him happy, thus keeping him at the club. And I was one of these doubters, I was at the Stoke game where he made his debut, coming on for Javier Hernandez and looking very good, fast, powerful and full of technical ability. But as time has gone by, I am starting to see more and more, the reasons he was allowed to leave.

Gerard Pique and Guiseppe Rossi are similar stories, but their departures are talked about much less. Pique is arguably one of the best centre backs in the world, and Rossi has shown he is capable of scoring bags of goals, whereas Pogba, hasn’t (as yet) really shown us we will miss him. The most obvious comparison of these players is a stark contrast in attitudes towards their time at Old Trafford. Pique and Rossi weren’t regulars in the United side, but they didn’t complain and come out in the press demanding they play and holding the club to ransom over a new deal, they simply moved on, without a bad word to say about United in its entirety.

Since he left in the summer, Paul Pogba has been quoted, on numerous occasions, ‘bad mouthing’ the club and the supposed poor treatment he got. In the wake of the Madrid game is the perfect example, slating Ferguson in the papers. Displeased about being second choice to one of the greatest midfielders produced in this country.

In conclusion, I don’t think Pogba will prove to be the one that got away at all, where he does have fantastic ability, he also has a fantastic knack of attracting negative attention. Say he had stayed, and wasn’t getting a run of games and went complaining to the press, do we really need that kind of attention when challenging for silverware? I think getting rid of Mr Pogba before he became ‘our Balotelli’ could well prove to be another inspired decision from Ferguson, and one we should not waste any time fretting about.

5 responses to “Is Paul Pogba the one that got away?”