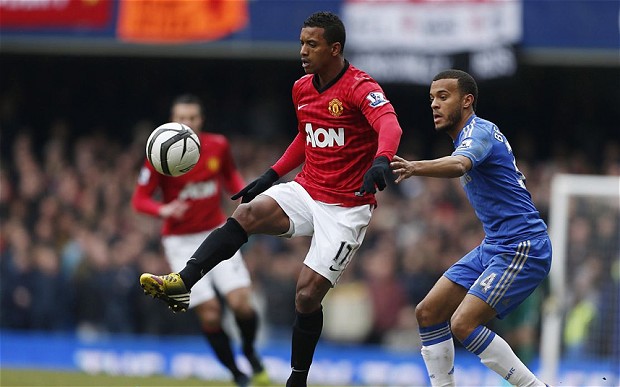 One of the very few lamentable aspects from this season has been the dramatic loss of form of our Portuguese winger Nani. The plight of the former Sporting Lisbon winger has been so drastic that it is bordering on unthinkable when we rewind to our last Premier League title in 2010-11.

Inspired rather than hindered by the departure of a fellow outstanding countryman, Nani well and truly emerged as a serious specimen following the world record sale of Cristiano Ronaldo. Stepping out of that profound shadow represented a significant leap forward in Nani’s United career and it showed with his quality performances on the pitch. He was scoring screamers, providing countless assists and was threatening to embark on something truly spectacular, he looked the finished article.

How times have changed though. That bristling style, the explosive energy and imaginative creativity of which he had in abundance when he burst onto the English scene in 2007 appears to have gone AWOL.

The cruel indictment of this was plain for all to witness in yesterday’s lacklustre showing at Stamford Bridge. As they kindly say in the trade, Nani ‘had one’. From the outset, his radar was having a panic attack, a rare foray forward involved Nani but his pass to Chicharito was weak and behind him- the Nani of two years ago would have picked the Mexican out with consummate ease and we would have had a chance to open the scoring. That was the most glaring example of Nani’s unfortunate demise. Seemingly, the spontaneity and creativity that made him such an enthralling watch is missing.

This reality is unavoidable but is one we really should not have to entertain, especially after Nani was Portugal’s shining light in Euro 2012. He had given himself a decent platform to take his game to the next level and cement his long-term future with United. Instead, we have had to endure the familiar Jekyll and Hyde tale with the Portuguese; something we all hoped had been long eradicated from his game.

From looking disinterested and abject in the opening game at Everton, fluffing a penalty and receiving a bollocking from Ferguson against Galatasaray, being subject to boos from our own supporters against Tottenham, being singled out by Ferguson for costing us the game against Chelsea in the League Cup, reportedly punching team-mate Davide Petrucci, to getting sent off against Real Madrid- Nani’s season has entailed and combined the sublime at times, with the cataclysmically disastrous.

In a skittles and beer world, Nani would rediscover that blistering form of 2010-11, the zenith of his United career to date, and his long-term future would be ensured by securing a new contract. It was a huge leap of faith from Ferguson to shun the advances of Russian moneybags Zenit Saint-Petersburg on the summer deadline day. Reportedly Nani was not keen on the move, despite the potential to have even deeper pockets, but Ferguson was also very reluctant to see him go. In the cold light of day, Nani has failed to reward that confidence. If Luciano Spalletti has been watching, he might question his thought-process and wonder why he bothered.

The problem with Nani is he is a tantaliser. He can be sub-par, he can produce magic. What is always the case is he always leaves you wanting more, regardless of the situation. Unfortunately, the ‘more’ has been in short supply this year for one reason or another.

This season has been a peculiar story as far as our wingers are concerned. We pride ourselves at United of having exciting wingers, who provide ample opportunities and contribute their fair share of goals over the 9 month onslaught.  But this season seems to have been a rare exception to this rule of thumb.

It seems as though it is a ‘big if’ currently, but if Nani could somehow show semblances of his previous self between now and the end of the season, it might give Ferguson something to think about. People, with validation too, have said that Nani has had numerous opportunities to take the bull by the horns and make one of the winger slots his own, especially as this year there is almost an accolade for ‘worst winger of the year’.

In his salvation attempt to rehabilitate his dwindling status at Old Trafford, Nani has been confronted with woe and misfortune. When we had Chelsea on the ropes in the original FA Cup quarter-final at Old Trafford, Nani was terrorising Ashley Cole and was at the forefront of our attacking exuberance which put us in the seemingly commanding position of a 2-0 lead. As half-time approached, Nani went down in a heap and that was that. We lost our way after his departure and surrendered the advantage. In the second leg against Real, he looked a livewire, in the mood and our most dangerous attacking outlet on the counter attack, before ‘that’ red card. Yesterday’s horror show capped the latest triumvirate of unfortunate events and summed up his season in a nutshell. When things were seemingly looking rosier, there is always a thorn of some form.

It is improbable that we will see Nani reach those dizzying heights of 2010-11 again. This second half of the season really is a ‘now or never’ scenario for the Portuguese. His contract is up in 15 months, and with his continuing inconsistency and remaining uncertainty regarding contract talks, it is growing increasingly likely that the next two months will be the final chapters in Nani’s Manchester United career.

Many believe that Nani has now ran out of chances, who would have thought that just two years ago?

5 responses to “Too late for Nani to reach his potential at Old Trafford?”