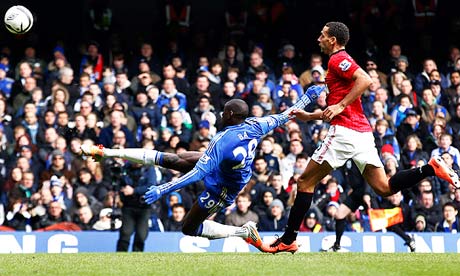 Chelsea are through to the semi-final of the FA Cup after defeating Manchester United 1-0 at Stamford Bridge. It’s the tie Manchester City had hoped for with a place in the final up for grabs, but how are we feeling about it?

Post match thoughts were split on Twitter. You had a few spoilt ones banging on about how we should walk each and every competition. Can you imagine them back in the 70s and 80s? Then there were fans gutted but looking to quickly move on to our next fixture which happens to be against City in the league.

The game itself was poor. We created few chances and failed to make most of them. That partly came from our lack of shape coming from wide positions. Without a winger in form, we failed to set up players inside the box. Valencia wasn’t too shabby at right back but Nani had a mare. Van Persie came in for some criticism after the opportunities he wasted. A volley of his stood out but it wasn’t an easy a chance as it looked, but a player of his quality should have scored.

For more thoughts on the game and how each player performed, listen to our podcast.