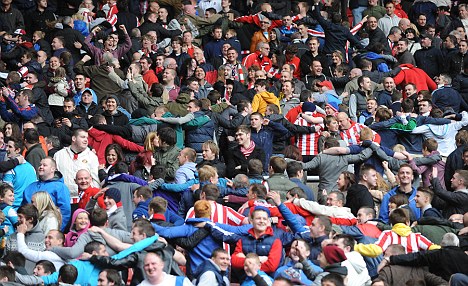 In normal circumstances, a club from the North East would not be circled on the calendar when the fixtures are announced. However, this season was not a normal circumstance. As is customary, the bigger fish to fry were the fixtures that immediately caught the United eye- the City’s, the Liverpool’s, Chelsea’s. So how did Sunderland join that elite bracket of grudge matches?

Over the Premier League years, United and Sunderland have not been considered as natural ‘rivals’. In fact, relations between the two clubs have smooth and hardly fractious. There are many connections between the two clubs- Dwight Yorke, Danny Simpson, Jonny Evans, Phil Bardsley, Kieran Richardson, John O’Shea, Wes Brown, Fraizer Campbell and Louis Saha have all appeared for both clubs. They even employed our former momentous captain, Roy Keane as their manager, Ricky Sbragia ensured their survival to maintain the fixture between the two, having spent time as a coach at United in his earlier days.

But last season was the tipping point.

We all know what happened so forgive me for skipping over those horrid details. But the manner in which they celebrated our demise that day, when their team had an average season at best was classless.

Both the manager and Wayne Rooney in particular were significantly overt in their damning assessment of the events at the Stadium of Light last season.

On the eve of the home fixture between the two in December, snippets of Rooney’s autobiography were flooded all over the national broadsheets saying: “I don’t know whether I will play the previous games before it, I just want to play against Sunderland.

“When the fixtures come out I look for three games — City, Liverpool and Everton. This time I checked the Sunderland game. If there is one team that I want to beat this season it will be Sunderland.

“When the final whistle went, we didn’t really know what the score at City was.

“But then we heard the Sunderland fans cheering. It was sad to see because they should be supporting their own team really. They didn’t have the best of seasons so for them to be cheering like that was sad. It was something myself and a lot of the players won’t forget.”

Ferguson was equally condemning when quizzed on their fans’ reaction: “What their fans did was disappointing when you think of the number of players we’ve given Sunderland. We gave them the players that got them promoted, Jonny Evans and Danny Simpson. But that’s fans, isn’t it?”

United exacted their first instalment of the revenge act in December by comfortably beating them 3-1- goals from Robin Van Persie, Tom Cleverley and Wayne Rooney, before one of those ex-reds Fraizer Campbell headed a consolation.

It promises to be a fiery occasion and a red-hot atmosphere. We have the huge incentive of going 18 points clear before the blue lot host Newcastle. After what happened last season, our travelling brigade owe it upon themselves to make some serious noise (this will be guaranteed, our away support is fantastic) and be the 12th man in helping complete the double on them this season.

Sir Alex Ferguson is well-known for his motivating skills and all-powerful management, what better way to sign off than this clear statement of intent to tomorrow’s opponents?

6 responses to “How Sunderland became the unlikely grudge match”