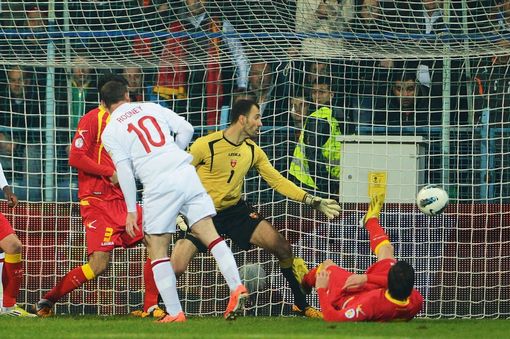 Before you start to rub your eyes or start swearing at the screen, yes this is not a joke. Normally, when players take temporary respite from the domestic exertions to play for their respective countries, not much good comes from it: excess travelling, United players inevitably on the receiving end of fallacious criticism and slander from the ABUs (just look at the torrents of flack Carrick and Cleverley continue to receive, their existence even in the squad was questioned, let alone their presence on the pitch).

Of course, true Reds are vehement preachers of the unwritten but majorly implied rule of “United> England”, but believe it or not, this recently finished International break turned out to be hugely beneficial from a selfish, United perspective.

Swapping club badges for the national badge allowed certain United players, who had previously lacked a bit of form and verve, to find their feet and rediscover the levels we all know they are capable of.

For instance, everything Robin Van Persie touched in the early stages of his United career turned to gold. However, sitting on just one goal in his last ten for United in recent times, Van Persie had gone through his longest barren spell since he was putting in a shift on the wing for Feyenoord as a rookie.

This lean spell proves that the Dutchman is only human after all and even the best have average days at the office. As the Oranje romped to a 4-0 victory over Romania in Amsterdam, Van Persie looked fresh and revitalised- as opposed to the jaded Van Persie in red. He converted a penalty and scored a ridiculously difficult header which he took with consummate ease and aplomb. The two goals will have been a significant confidence boost and a relief for the player and fans alike. As we embark on two away fixtures in two days, a fully firing Van Persie will be key to any success and quite possibly our double prospects hinge on Van Persie’s continued firepower. Those two strikes will hopefully see him go on a run which will see him return to that blistering early season form.

Wayne Rooney often is subject to vilification and heaps of abuse from England fans. Despite his impressive record for his country, people still label him as a ‘club player’ who doesn’t give his all for the cause. Rooney is actually one of the few who contradicts that claim. One thing Rooney guarantees is commitment, whether it’s a kick-about in the park or in front of 75,000 expectant Mancs. He returns to club level having notched goals against San Marino and Montenegro. Rooney is a player whose fitness and form relies on constantly playing, he suffers from any spell on the sidelines, which is why the minutes he got for England were crucial, and the goals were an added bonus. No matter what tabloid journalists want you to believe, Rooney makes United tick and his importance to our club remains undiminished. If Rooney and Van Persie start to wreak havoc and continue their fledgling partnership, the league could be over pretty quickly.

Another player whose performances have been under scrutiny and put under the microscope are that of Ashley Young. He started his United career like a house on fire, but struggled for consistency, his cause not helped by injury. It has been a similar tale this season for Young- coming off the back of a disappointing Euros he had a point to prove to many, including our fans. Without a goal to his name or a consistent run (again due to injury), question marks remain whether he is a ‘Manchester United’ player. Fans may continue to be sceptical about him, but what cannot be denied was he scored a beauty against San Marino. Obviously, they represented ideal opponents to fill your boots, but even the best would have struggled to have got near to his screamer off the crossbar. Young is very much a confidence player, without this he struggles to be effective and goes missing. That goal will have upped the confidence levels, something that will hopefully deliver performances akin to his debut campaign.

Speaking of players who have struggled to be effective and going missing, what has happened to Tony V this year? This is a man who clean swept the end of season awards last year and was rewarded with the iconic number 7. Has the pressure got to him? Rumours persist that he is playing on with an injury, but fast forward from then to the present and this is a man who looks timid, reluctant to take on his marker and provide. This malaise has meant most of Tony’s game has been taken away, the Valencia of two years ago that would breeze past his full-back and send over crosses appears to be stored away in his locker. However, there appears to be light at the end of the Ecuadorian tunnel- He followed up 3 assists against El Salvador by playing a starring role in their 4-1 victory over Paraguay. He looked like the old Valencia, tearing up and down the wing- he even scored with his LEFT foot! I know… Unfortunately the pearler was ruled out for offside. An on-form Valencia is as destructive a winger around, we need to see the old Ecuadorian, he has a platform to build on now.

Much was hoped for of Shinji Kagawa upon signing from Dortmund last summer. Formidable in the Bundesliga, he carried on that form in the early stages of the season. He looked like the creative spark we had lacked, a goal threat too, before injury curtailed this promising start. Kagawa is back in the reckoning now though, he scored a sumptuous hat-trick against Norwich last month and he continues to flourish in Japan’s colours too. He got on the score-sheet and looked lively and busy as usual in their 1-2 defeat to Jordan. We have been treated to snippets of what is to come for Kagawa, a strong end to the season would not go amiss now, which can lead to something even better next season.

The difficulty that crops up though is the air miles that Kagawa, Valencia and Chicharito chalk up in their droves. This is something not alien to the club or the trio concerned though so their fatigue will only come as a minor hitch in what was otherwise a very encouraging International break for Manchester United.