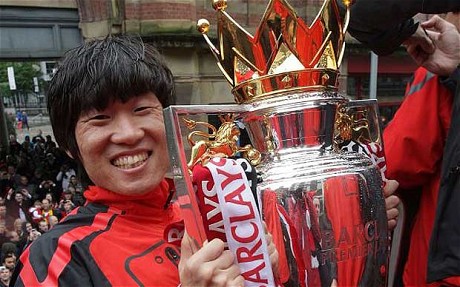 He may no longer wear the red of Manchester United, but the reports emanating from Sky Sports today that Ji-Sung Park is contemplating retirement were still a relative bombshell on the Republik of Mancunia.

The rumours come barely a week since another ex-red, Michael Owen, announced he had no further ambition to prolong his playing career.

Moving to a team facing relegation directly in front of them was always going to be an alien experience and a challenge even for Park, a man who for so long has been accustomed to having gold around his neck and silver in his hands.

He has struggled for form and fitness, since he was signed by ex-Red Mark Hughes, who subsequently went on to lose his job and Park has not really had a sniff under Harry Redknapp.

The rumour of Park’s potential final bows came from his father, who had the following to say on his son’s predicament: “Nobody knows the future; maybe he could play one more year with a new team after next season. But I think he has made his mind up to retire. He thinks he’s played enough.”

“He’s never had times like this with PSV Eindhoven or Manchester United. My son has had difficult times at QPR this season; it was a new experience to him.

“Ji-sung said it’s difficult to keep his feel for the game as his playing time is inconsistent, but he doesn’t have any hard feelings.”

It is somewhat bewildering and staggering that a man of Park’s calibre and experience cannot hold down a regular place in a team stricken by poor results. In times like that, surely a team would give life and limb to have ‘big-game players’ (the tag that Park was associated with during his time at United).

Park played 205 times for United scoring 27 times. He can boast collecting 8 major honours in his career, yet that is not good enough for a team in a relegation dogfight?

Aside from the fact that Park hasn’t had a consistent run of games in London, what is equally surprising is he wants to quit the game altogether rather than seek pastures new. Rio Ferdinand christened the Korean as ‘three-lung Park’ due to his extraordinary stamina, dedication to fitness and seemingly relentless energy bursts. He is only 32, which for a midfielder is not necessarily ‘over the hill’- you only have to look at our very own masters Giggs and Scholes are examples of sustained longevity at the highest level.

Surely there would be no shortage of takers for a man of proven heritage whose stock should still be high despite the turmoil post-United.

Whether he has lost the appetite or feels he can no longer achieve what he wants to, we can only speculate.

Seemingly, the theory that the only way after United is down has reared its head once again.

If Park is packing it in for good, we at Stretty News wish him all the best in his future endeavours.