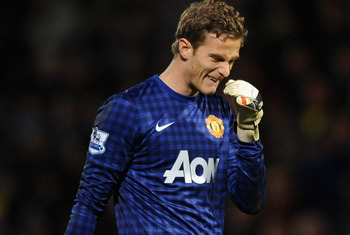 Anders Lindegaard has spoken of his frustration with life on the bench at Manchester United. This time, however, he hasn’t refereed to picking his nose or anything of the sort.

The Danish keeper is behind David de Gea in the pecking order at United, but Sir Alex Ferguson had been interchanging between the pair earlier this season. The manager’s mind probably wasn’t set on who should be No.1 but our young Spaniard was never a doubt for me.

While De Gea may still have his critics, I think the vast majority are finally getting around to observing the fact he’s better than Lindegaard. All keepers make mistakes but our 22-year-old is mentally strong enough to get beyond those slip-ups and learn. I don’t think we could ask for more.

Lindegaard, on the other hand, has only played once since Manchester United’s 4-3 win at Reading in December. The Denmark international cost around £3.5 million following his move from Aalesung in 2011.

“For me at the moment it’s not easy deal being on the bench when the team is performing as well as we do,” Lindegaard told the Daily Mirror. “And, of course, when David is also performing as well as he does and has been doing in the last couple of months. Of course, everybody wants to play and I’m not different from anyone else. I’m sure all the players who are not in the starting line-up every game would say the same and they want to play. That’s how football players are. It’s a genetic thing in us – we live for the thrill of playing and the adrenaline you get when you step out on the pitch.”