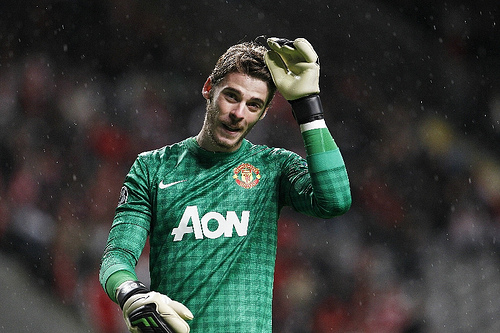 David de Gea insists he is very happy at Manchester United, despite reports linking the goalkeeper with a move to La Liga giants Barcelona.

The young Spaniard has done brilliantly in recent months rubbishing critics in the English press. For instance, De Gea’s performance against Real Madrid at the Bernabéu last month earned plaudits and his abilities got the appreciation they deserved.

Ever since Victor Valdes made it known that he was no longer happy at Barcelona, our Spanish number one has been linked with a move to Camp Nou. Valdes joined Barcelona’s youth academy in 1992 but his contract runs out in 2014. Thankfully, De Gea confirmed he has no plans to leave Manchester.

“For the time being it’s Victor, and it will be difficult that he leaves,” De Gea told Onda Cero. “I am very happy in Manchester and it will be my club for many years.” He went on to say how thrilled he is in Manchester, but admitted a return to his native Spain would be on the cards after a long career with United.

“But with the passage of time returning home is nice. I would always like to return because the love that they gave me there was special,” he added.

Aged 22, De Gea earned his first call-up to the Spain national team for their forthcoming World Cup qualifiers against Finland and France.

“I am very pleased and happy. This is a special moment for me and a big step in my career. I will try to do my best to impress the boss [del Bosque]. I want to enjoy this and learn from my team-mates, who are my and many other people’s idols. It’s a pity Iker Casillas is out. We all know he is our captain and a legend but I’m happy to be here, even if it’s because of his injury.”