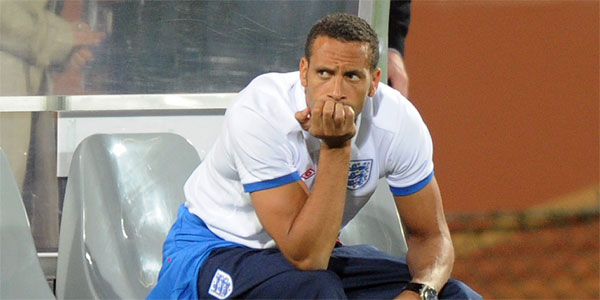 In the cold light of day, representing your country has been majorly devalued and lost most of the attraction it once had in abundance. Ask any average fan of any club and they will surely tell you that club matters over-rule the torture that it has become following England. At United, there are banners conveying such a message, ‘United > England’. It is as equal an indictment of how the mighty have fallen somewhat as much as how fervent our support for our club is. I mean, the famous banner ‘United, wife, kids.. in that order’ is credence to that fact that the ‘club over country’ consensus is not one which only runs deep in players, but also fans.

Mainly due to the fact that the powers that be do not overly help themselves when it comes to footballing matters. For some reason, our domestic football governing body is seen as a creditable organisation. That said, it is cop-out when the competition is from the respective planks who control UEFA and FIFA.

There was much hype and speculation regarding the International future of Rio Ferdinand, having been very much in the cold for a significant period of time when it came to national selection, the news on Thursday that Woy decided to recall the defender for the upcoming qualifiers against Montenegro and San Marino polarised opinion and split the nation.

Over the years, Ferdinand has been no stranger to the proverbial hot water with the FA. In September 2003, he was banned for 8 months after failing to appear for a drugs test. At the time, he was made to look the scapegoat and was deemed necessary that he be severely punished and be made an example of. The caveat to this is the example of Kolo Toure, who actually FAILED a drugs test and got off with a lighter punishment. In terms of maintaining an obdurate and firm stance over the drug testing, the FA blundered there. The FA actually sought to increase the duration of the ban too, but the original verdict was upheld. Well played sirs.

Regarding the topsy-turvy at times diabolical regime under Fabio Capello, Ferdinand was involved in the fun and games of a captain’s armband pass the parcel with John Terry. Ferdinand had the armband, then didn’t have it, had it again before Terry got the job on a full-time basis. The fact that players have to audition for an increasingly meaningless symbol wrapped around their arm speaks volumes of the backwards system at the time. This, by the way, will not be the last you hear of the Moscow penalty slipper in this piece.

Ferdinand was fined by the FA for a delicately ambiguous Tweet aimed at Ashley Cole- ‘calling’ him a ‘choc ice’ regarding information given by Cole at a certain court hearing. Ferdinand became embroiled in such a flare-up in defence of his targeted brother, who was subject to racial abuse from that man Terry. Cole conveniently and typically stated that he did not hear or see Terry make such a claim to Anton Ferdinand, laughable when the whole world that was watching could clearly make out what was said, you didn’t have to have terrific lip-reading capabilities to determine what was said. In any case, pardon Rio for sticking up for his brother.

It is not just the off-field palavers that stick out like a sore thumb when it comes to Ferdinand’s treatment. On the eve of the European Championships last year, Hodgson inexplicably claimed that he had not selected Ferdinand in his squad for ‘footballing reasons’. This despite the fact that Ferdinand had proven his fitness by appearing in more matches than Terry last season and producing some of the best football of his career. It is plain to see that 1+1=2 in this situation- Terry walks away from the court hearing scot free, Ferdinand hits out over the outcome, both Terry and Ferdinand couldn’t possibly function in a united manner, there was only going to be one winner of the duel- but for ‘football reasons’, please…

To add salt to this particular wound might have been hard going on paper, but somehow Woy found a way to aggravate Ferdinand further: Gary Cahill had to withdraw from the tournament due to injury, meaning England could call up a replacement. Speculation was rife that Rio would be on the next plane. Wrong. Liverpool’s Martin Kelly, with only 2 prior minutes of international football under his belt, answered the SOS call. ‘Footballing reasons’ eh Woy?

As a rule of thumb, to take what the Daily Mirror has to say at face value would be bordering on blinkered. However, they produced video footage of that man Hodgson on a London Underground telling passengers that Ferdinand would no longer be considered for selection. This is one of those moments you see at the circus; you know the one involving a custard pie and a face. Speaking of circus, that has been an accurate summation of the Ferdinand saga lately.

England’s loss has undoubtedly been our gain, Fergie must draw a smile and a chuckle over a glass of vintage red when he reflects on how, like the wine, Rio seems to be getting better with age. He has been well-managed in typical Fergie fashion; he knows the limits to which his body can stretch itself better than before. This has resulted in him appearing in more matches than people would have foreseen, I suspect a lot of people have recycled premature Ferdinand footballing obituaries. There is no need for the Zimmer frame just yet.

He has carried on the form from last season, relishing being the elder statesman in a fledgling United backline. He is still the Rolls Royce of central defenders, considered the best ball playing defender of his generation, Ferdinand is still setting the standard for accomplished defending- typified with his monumental performances in the white heat of the Bernabeu and corresponding raucous atmosphere in the second leg.

For Hodgson to effectively hold his hands up at his error in judgement by recalling him now is a vivid indicator of Ferdinand’s undiminished class. But effectively, Ferdinand is only deemed as a stopgap, almost an SOS.

Frankly, such a title is derogatory and an insult to footballing class.

Other players might have told Hodgson where to go, I know most people would have done. Ferdinand is too big for that and loves representing his country too much.

But after all the various debacles for one reason or another, maybe Ferdinand should have gave him the cold shoulder.

2 responses to “Rio and England – Surely enough is enough?”