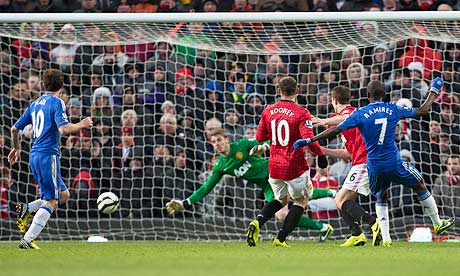 As a hard week comes to an end, we have all been blessed with a chance to stop and take a long, hard breath of relaxation. We have gone out of the Champions League and played a wasteful 90 minutes against a Chelsea side that earned themselves a replay in the FA Cup. Up next is Reading on the 16th of March and Sunderland on the 30th of that same month with the international break somewhere in between. Enough time to relax for the “bigger games” versus Man City and the FA Cup replay against Chelsea in April 2013.

It always comes down to harsh criticisms and unfair judgements when United do anything less than win in style. However the vast majority of fans wanted to see a revitalising game that featured beautiful plays and exquisite goals, the fact of the matter is Real Madrid drained a lot of United’s stamina earlier this month. First half goals and the way United kept keeping the visitors out, time after time eventually had it’s toll on the players.

“I can’t be critical of the side because the running they had to do on Tuesday night, against a really top side in Real Madrid, had its bearing on today’s result, no doubt about that.” – Sir Alex told on MUTV.

“The replay is not a problem for us,” insisted the manager. “We’ve got plenty of time for it as we have no European games. I don’t know when it’s going to be played mind you, probably May because we’ve got the international break coming up! But the only thing we can say is we’re still in the cup.”

With Reading and Sunderland coming up soon, I don’t think it will be a piece of cake for the Reds. However, it would give the manager a chance to utilise the squad more effectively during these fixtures. The international break between now and the time we face Chelsea would also give our regular starters enough rest for the much important games.

Now that we’ve managed to get past the “hardest part” in terms of back-to-back high profile games, I’d go ahead and assume that it can only get better from now on. I’m sure a number of fans would most likely argue otherwise but from here on, the road towards the finishing line seems smoother than it has been this season. I honestly don’t foresee Manchester United playing this ordinarily in the replay against Chelsea, come April.

One response to “A welcomed breather – international break”