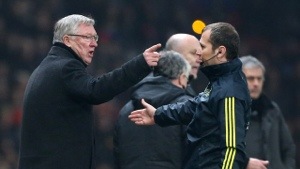 Ferguson reacted angrily in response to Nani’s red card for a challenge on Alvaro Arbeloa before the hour mark in Tuesday night’s Champions League tie with Real Madrid at Old Trafford. The Reds were leading 1-0 at the time, but the game turned for the worst ending 2-1 with goals from Luka Modric and Cristiano Ronaldo. The Spanish giants went through 3-2 on aggregate.

Our assistant manager Mike Phelan was a credit to the club as he addressed the press instead of Ferguson, who was too “distraught” to answer questions on the game at the time. The players refused to stop to talk in the mixed zone also. This has lead to speculation that the boss could consider retiring at the end of the season.

UEFA issued a short statement on Wednesday confirming disciplinary proceedings have been opened against the club regarding the two incidents.

“Uefa has opened disciplinary proceedings against Manchester United FC for [the] red card of Nani [and] post-match media obligations not fulfilled [under] III 2.6 and 2.7 of the competition regulations. The case will be dealt with by the Uefa Control and Disciplinary Body on Thursday 21 March.”