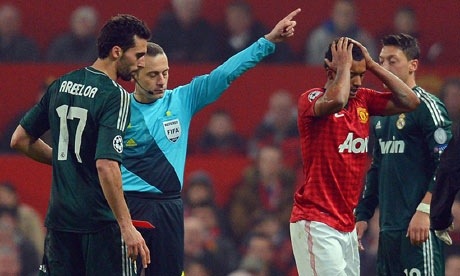 “We have no problem with him,” a Uefa spokesman said. “There are no issues for us regarding the sending off and we will wait for the official reports of the match delegate and the referee’s observer, as is procedure. If they raise concerns then we will act.” The representative in question confirmed that the Turkish referee remains on their list of officials and escapes any punishment despite making that awful decision which cost United a place in the quarter-finals.

Gary Neville was in the majority disagreeing with the decision, but Roy Keane had to be different.

Neville said: “Nani is a player who regularly tries to control a pass like this over his shoulder and its never a red card! Changed the whole game! Poor ref.”

UEFA has also confirmed that Nani will receive an automatic one-match European suspension following his red card. And some have the cheek to come out with comments such as “United always get the decisions.”

Fergie’s right, the refs are shite.

One response to “Last night’s ref receives backing from UEFA”