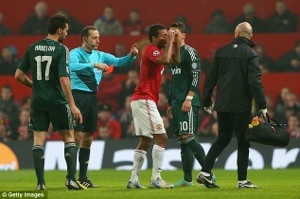 Last night’s referee, Cuneyt Cakir, played a major role in granting Real Madrid a place in the quarter-final of the Champions League. Old Trafford, as a whole, was in disbelief when the Turkish referee sent Nani off for what I would describe as dangerous play that warranted a caution only.

The argument is the fact Nani had his eyes on the ball before reaching out in attempt to gain possession. He didn’t see Alvaro Arbeloa, who made most of the challenge rolling around as if he was shot. And if anyone deserved a booking from the incident, Sergio Ramos fits the bill for running yards among yards waving an imaginary card which I felt influenced Cakir’s decision.

It was a harsh decision. Nani didn’t go in deliberately but the Madrid players, Ramos in particular, badgering the referee didn’t help. This is something Madrid and Barcelona have been criticised for in the past. I’m just curious why they continue to get away with it without any punishment.

Former Manchester United captain Roy Keane made the headlines for his unsurprising contrary view on the incident. The ITV critic was quick to play down suggestions that referee had made a mistake in sending off Nani, while jumping down Gareth Southgate’s throat for disagreeing in an almost bully like manner.

This is not a matter of turning on the 41-year-old because of the opinion he expressed last night. During his United days, Keane was a hero of mine. However every time he comes out seeking attention with bizarre views on the club or Sir Alex Ferguson, he sounds increasingly bitter. This is completely down to how his big mouth got him booted out.

Paddy Crerand, who won the European Cup with United in 1968, reacted to the red card this morning on The Nolan Show. When asked about Roy Keane, he said: “I played in a European Cup final, Roy Keane didn’t, the referee was wrong.”

Another argument is should Diego López have been sent off too? When a goalkeeper rushes out, punches a player full force into the face while missing the ball completely, how does he escape a red card? I know it happens and they get away with it all of the time, but surely it can be listed as dangerous play…

One response to “Correct decision to send Nani off? Nah…”