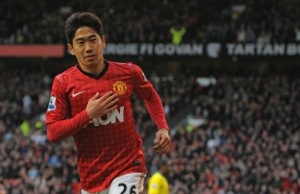 As far as safe bets would go, you could probably place your bottom dollar on the fact that if you asked the average football fan 2 years ago if they’d heard of Shinji Kagawa, the response would be one of confusion or derision.

It had been a common gripe, a universal plea from our demanding supporters that we needed to bolster our squad with a free-scoring, creative magician in midfield. As that Belgian ball-boy kicker was taking to Twitter to announce he would be raking in Abramovich’s riches, it seemed as though the transfer window would offer next to little salvation in our attempts to avenge the misery of last season.

As much as the pain of Hazard posing with a Chelsea shirt felt like a kick in the crotch at the time, a very significant opportunity arose when Dortmund could not persuade the young and talented Japanese attacking midfielder to pen fresh terms with them (much like the situation with their Polish striker, Robert Lewandowski).

So as we took advantage of this chink in their armour and announced the signing of 23 year old Shinji Kagawa, the sceptics, doubters and cynics all clamoured to give their two penny worth: ‘we’ve only signed him to sell shirts’, ‘never even heard of him’ were two of the more noteworthy criticisms that were emanating. Of course, the revenue and commercial gain from signing an Asian poster boy is plain to see. This backdrop, having just seen our Korean poster boy Ji-Sung Park start his new adventure with QPR, was to be expected. They thought one Asian star replaced by another was no coincidence and did not have our best footballing interests and goals at heart.

Kagawa is heading down the right path to silencing the unconvinced loud-mouths.

In a woefully under-cooked and lethargic performance at Everton on the opening weekend, Kagawa was the only outfield shining light. He followed this up with a goal and ultimately bright and breezy on his Old Trafford debut against Fulham. He was on the score-sheet again in our dismal home defeat to Tottenham.

Those who were questioning the motives and reasons behind the Kagawa signing, and there were a lot, only need to assess his exploits in the Bundesliga last year and see that the proof is in the pudding. Kagawa’s flourishing partnership with German wonderkid Mario Gotze was the transforming effect that saw Bayern get knocked off their all-too-familiar perch with Dortmund completing the German domestic cup double on a shoestring budget in comparison to the Munich outfit.

Unfortunately from our perspective, his creative genius has so far been truncated due to a niggling ankle injury picked up in November, meaning he missed the majority of the festive fixtures and was behind the others in terms of match fitness and overall sharpness. One criticism that continues to rear it’s head is the differences in physicality and how Kagawa will adapt to such dissimilarity. In Germany, and Europe as a whole, the game is virtually a non-contact sport- we see it in Champions League matches that even the semblance of a high-foot gets punished, whereas in the Premier League, an eyelid is not batted. Kagawa’s technical ability means the he has not had to adapt the quality of his football, but with the quicker pace and relenting intensity of Premier League football, Kagawa has probably not found this adaptation to be plain sailing, epitomised by his injury misfortune. As David Silva and Lionel Messi can testify though, you do not have to be a physical brute or a battering ram to succeed and be at the top of your game- the players who are slight in stature generally are more appeasing on the eye and although they get lumps kicked out of them by inferior beings on a weekly basis, they are not too shabby players, the same applies for Kagawa.

For a man coming into the most competitive league in the world with the hindrance of the language barrier and weight of expectation on his shoulders as another Asian import, Kagawa’s return thus far has been pleasing. In just 11 starts, he has bagged 5 goals and assisted his fair share.

It seemed on first inspection that Kagawa and Manchester United would eventually become a perfect fit. The cut-price deal we managed to broker with Dortmund tied in impeccably with the not so endearing United jargon ‘Glazernomics’. As is common knowledge, United’s following in Asia is astronomical and merely the thought of seeing Kagawa posing on United billboards over there is a Glazer orgasm. Aside from the finances, Kagawa ultimately could prove to be the creative spark that we have craved for a few years now.

You only have to watch a couple of minutes of Kagawa in the flesh to determine that he is a very attractive player on the eye and that he offers substantial variety and quality in comparison to our his midfield competitors at United. He offers technical ability in the final third, where composure and flair are required. His movement off the ball and balance and guile on it are unmatched amongst our ranks. He has the eye for a pass and a clinical and ruthless calmness in front of goal, as demonstrated by those ridiculously cool, sumptuous finishes at the weekend against Norwich.

The last few weeks have given fans hope that Kagawa could be earmarked as our modern-day Paul Scholes. Given a start in the footballing coliseum of the Bernabeu, in our biggest match of the season, many saw the selection as a gamble from the manager, who for all intents and purposes was keen to ease him back into the fray. The selection was seen as somewhat left-field, and that’s where he shone on the pitch. His movement that has been discussed caused havoc and he proved a very effective link between the Carrick/Jones midfield shield and the cutting edge attack provided by Rooney, Van Persie and Welbeck. The manager stated in this month’s Inside United magazine that he ‘wanted to play a central midfielder on top of Alonso, to then run off him’. Kagawa’s selection was vindicated by nullifying Alonso, who is the hub of their attacking menace.

If the Madrid encounter represented the embryonic stage of Kagawa’s brief United career, Saturday against Norwich was him taking his first steps on the long path to stardom at United. He opened the scoring after what had been an ultimately frustrating first-half with a beautifully disguised finished at the near post (let’s go with that, rather than a shank). His confidence levels just seemed to soar and he was purring in the second half. His second goal was one to treasure: Wayne Rooney collected Michael Carrick’s beautiful lofted ball (hard to believe it’s not Scholes), Rooney checked inside his marker before unselfishly laying onto Kagawa, this finished was disguised- with defender and keeper scrambling across the line, Kagawa used the defender as the masker to roll the ball home into the other corner. The Norwich defenders got ‘merk’d’ as Rio would put it, the finish was unbelievably cool, it was a virtual piss take. This was the Kagawa that took the Bundesliga by storm. His hat-trick was completed when he showed a burst of pace and perfect touch to take two defenders out of the game before calmly lofting the ball over the onrushing keeper. That ensured he became the first Asian to score a Premier League hat-trick and he took to our hearts.

Kagawa has put himself right into contention for a starting role tomorrow night against Madrid. Not only because he quietly went about his business in the Bernabeu but evidently the hat-trick on Saturday could go a long way to twisting the manager’s hand, who normally knows his team for forthcoming games well in advance. If Kagawa was not down to play tomorrow, he has given the boss a serious and welcoming selection headache.

Both Sir Alex and Kagawa’s ex-manager Jurgen Klopp are adamant that we will be treated to the real Kagawa next season. If Saturday’s little taster is anything to go by, Kagawa will be a star in this side for years to come.

One response to “Lift-off for Shinji Kagawa”