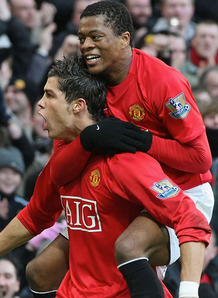 Ahead of Tuesday night’s Champions League second leg clash against Real Madrid, Patrice Evra has sung the praise of former teammate Cristiano Ronaldo. The French left back claims if granted the opportunity, Ronaldo will punish United despite still being in love with the club.

“It is difficult when you play with love,” Evra told MUTV.“Cristiano will get a great reception on Tuesday because of what he achieved for Manchester United. The fans will never forget what he did. Also, he still loves the club. I remember after the game in Madrid we had a chat. He said it was going to be more difficult to come here. This is his house, so there will be a lot of emotion. I hope he doesn’t play well because of that. But Ronaldo is a winner. He is a big competitor. If he can win against Manchester United he will do it.”

SN has captured a few of Ronaldo’s fondest memories as a United player. Click here to watch the video.