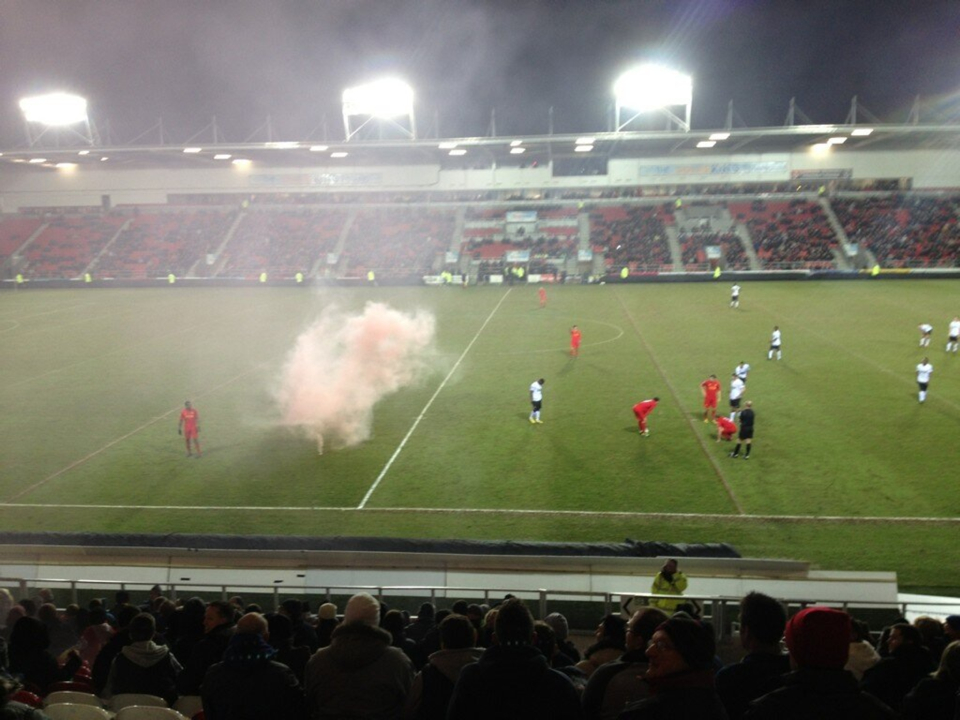 Michele Fornasier capped off a trip to Langtree Park for United’s under-21s tonight with an injury time winner to beat a competitive Liverpool side 1-0.

United started brightly and passed the ball around crisply. The first real chance fell to Jeffery Schlupp in the first minute when he was sent through on goal by Nick Powell, only to find his shot sent wide. Five minutes later he found himself in front of goal again forcing a save from Liverpool’s goalkeeper Danny Ward.

It wasn’t long before Liverpool started to create chances. Alexander Butter, who has appeared in United’s first team regularly this season, granted them too much space on the right allowing the likes of Wisdom to attack down the flank dangerously. Morgan was unlucky not to score an opener for the home side, hitting the post inside the first 10 minutes.

Despite playing at left back and being partly at fault for granting Liverpool so much space out wide, Buttner did not allow Suso any space in the first half hour. The Spanish youngster who joined the Anfield club last year had hoped our Dutch full back was substituted before the interval when it looked as if he went over on his ankle after a challenge from Jonjo Shelvey. Thankfully he got up and played on.

The best chance of the first half came after a superb run through midfield by Jesse Lingard, beating three Liverpool players before sending the ball to Schlupp. The German striker took the ball under control before forcing Ward to make another save.

Neither manager made changes during the interval, so it was about to pick up as it finished. To sum up the first half, however, it was scrappy and lacked a final ball inside the box. Given the performance of both teams in the first 45 minutes, I initially thought the team to score first would win.

Liverpool were down to 10 men after fifty minutes with Sama picking up a second yellow card – both as a result of challenges on Schlupp, who he struggled to deal with all night. I honestly don’t think anyone could complain about the referees decision to send the youngster off for an early shower. The home support went on to falsely accuse United fans of racist chanting towards Sterling and Sama. Not sure when the term ‘Scouse’ became a racist slur…

United with the extra man began to create chances more frequently; Tom Thorpe had a header cleared off the line on the 68th minute. As time went on the Merseyside club became increasingly disciplined in attempt to take away our advantage of having 11 men on the pitch.

Their disciplined tactics worked right up until the end before Michele Fornasier scored a late winner on the 94th minute. The defender was in the right place at the right time when Liverpool goalkeeper Ward pushed the ball in front of him.

Man of the match: Adnan Januzaj