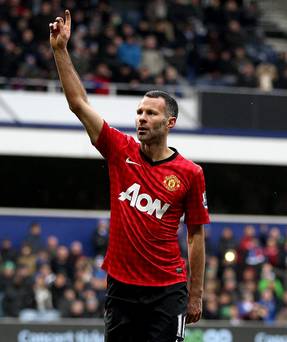 Rafael da Silva has sung the praises of Ryan Giggs, claiming that the Manchester United midfielder has been so good for so long that it’s beginning to get boring.

Not many would disagree with Rafael either. Giggs was slated up until Christmas for being “past it” after a number of poor performances in central midfield. Since January, however, he has managed to turn things around while getting his name on the scoresheet enough times to surpass the likes of David Silva, Aaron Lennon and Adam Johnson.

It’s clear the Welshman is still a strong influence with Rafael confirming he’s one of the veterans young players go to for advice, on and off the pitch. Nobody knows how long his career will last but I hope Giggs signs another 1-year contract. Perhaps another after that depending on how it plans out.

“Ryan is an unbelievable player,” said Rafael. “Every game you see him, he works hard, scores goals and makes assists. He is such a good player it is getting boring. He is the same in training, he just loves to play. He is one of the top players that I have played with. He gives us experience, confidence and when you are feeling bad he comes and helps you, especially the young players. Sometimes young players find it tough going and he helps them to show how to do it. He knows from playing for 22 years. He pulls the player aside and gives him advice. He spoke to me a lot when I was young.”