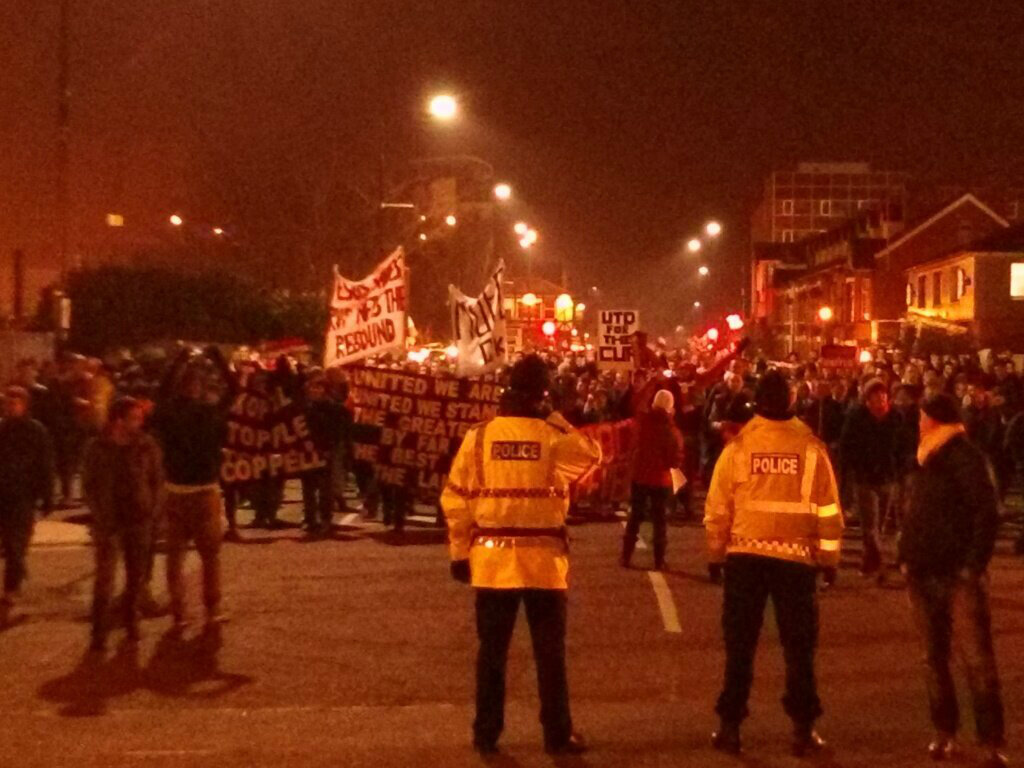 It’s not a protest or an attempt to turn Old Trafford into the Old Trafford that bounced against Barcelona in 1984 for Reading on a Monday night; that’s not realistic. It has so far been an opportunity to have a laugh with fellow Reds, marching around the ground singing traditional songs such as ‘she wore’, ‘Que sera sera’ that don’t always get the airing they deserve. We have done it so far for matches that would otherwise have offered very little for Reds who buzz off an atmosphere.

Reclaim United set outside The Bishop Blaize behind a ‘Call the ‘Doc’, I’ve got cup fever’ banner. There are a few other homemade banners such as ‘Jesus saves, RVP nets the rebound’, ‘Bring on United’ and ‘The Kop’ll topple to Hill and Coppell’ all made by United fans from the Red Issue forum or Twitter. The noise echoes with the South Stand’s tight fit especially, offering impressive acoustics. The march picked up momentum for the Fulham game with the whole lot of us surrounding the Munich Tunnel, front to back.

The make up of the group varies from older 70’s and 80’s time served Reds to young ones still in their first 100 games period. That in part is probably due to social networking being used to spread the word. We hand the banners to dads and lads or young teens. When handing out leaflets some of the younger fans ask if they can help take some off us. In modern football you see very little of fans in top flight football actively doing something that is not organised for them. So to have young United fans eager to get on board is healthy and pleasing to see.

When we started the idea eight days prior to the Fulham game/march it was admittedly done with barely a degree of seriousness, it was just for fun and it still is as going to the match should be. Since then the club have been in contact and wanted to help. A few days before Reading they agreed for banners to be allowed in under a certain size and encouraged fans to make their own banners by posting the march details on the club website. It’s a positive step forward and gives us a chance to build on a DIY spirit that makes a set of supporters unique. When modern football normally offers flags on seats like they have done at Villa, City and Chelsea its healthy and nice to see the club are open to allowing fans to uphold a more traditional way. Without doubt it’s a better way. How far that goes is up to match-going Reds. After all it is an opportunity that can be seized if the club continue to be interested in what we do.

Going back to the original point this is not Old Trafford of the 70’s and it’s laughable to think that anyone might think that was our intention. We wanted to see how many like minded United fans were up for some fun, but it’s a chance for us to put the breaks on a zombified modern day football experience and best of all we get to do it ourselves which is how it should be. The obvious problem for the marching Reds is that having created what they have done outside, once inside the ground we are separated. Just imagine what it would be like if we could all walk into an empty stand together. It would make such a difference. We hope Pete Boyle and others backing a singing section make some progress on that front. It could make a fantastic difference if done right.