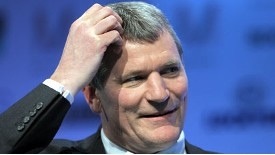 So ‘yes man’ David Gill is to be replaced this summer with an even yesserer ‘yes man’ in number cruncher Edward Woodward.

The question is – will it result in better communication between United and fans’ groups?

Prior to 2005, fans’ groups such as IMUSA had decent dialogue with the club and Gill embraced it.

But that changed when the Glazers came in as Gill felt it hypocritical to speak to groups that objected to the mechanism (i.e. loading the club with debt) that allowed the Glazers to take ownership of our club.

In their statement about Mr Gill’s departure yesterday, MUST hit the right note, praising him for his efforts while acknowledging that club-fan relations could be better if he had changed his tune.

So will things be any better under his successor?

Well, Woodward told The Independent in October he thought the club could communicate better with fans.

But he didn’t mean sitting down with IMUSA and MUST with a cup of tea and biscuits to thrash out issues affecting supporters, such as high ticket prices, safe standing and away allocations.

What he actually meant was: ‘We have to get more fans to believe the debt is not a problem.’

One key aspect of this debate is the clubs signed up to a UEFA initiative last summer to employ a supporter liaison officer (SLO) – a role chief press officer Phil Townsend and the customer care manager Lorraine Hatton-Dow share.

The current set up is the club will work with individual fans and fans’ groups on relatively straightforward or non-contentious matters.

For example, when Reds Away and MUST asked why club staff had tried to flog City away tickets to executive members contrary to the normal ticket procedure, United came back within an hour, explained it as an unfortunate mix up and apologised.

And, last season, when MUST pointed out season ticket holders in the ACS weren’t happy at the prospect of being forced to pay Champions League for Europa League games, United reacted quickly and made the ACS opt-outable and changed the credit system for the rest of the season.

But when more contentious issues surface, the club will only work with its fan’s forum.

For example, there were safety issues arising from our match at Newcastle this season and it could mean we get fewer tickets next season.

Reds Away asked Newcastle for information and its safety officer said they would only deal with United – and United will only share information coming from other clubs with fans’ forum members, so Reds Away and MUST find it harder to address the situation and preserve tickets.

The forum, it is made up of 15 fans who meet three times a year to discuss various issues.

Members are appointed by an independent body – not elected – and, bar a few extremely passionate members like Dave Pennington, they simply don’t make an effort to canvass fans on vital issues and waste rare meeting time talking about the kind of potatoes served in the ground and the kind of hand dryers in the toilets.

And we don’t even get to see what they talked about until the meeting minutes appear on the United website three months later.

I see the work MUST and IMUSA members put in on a daily basis and I don’t think anyone could argue against the point that these two groups are much more active and representative of fans than the fans forum members, who rarely respond to emails.

I know not everyone likes MUST or IMUSA for various reasons, but there’s not really anyone else for the club to talk to about issues that affect fans.

And I don’t think anyone would suggest that no dialogue is better than dialogues of good-but-imperfect groups.

The examples above are just two instances of where informal club-fan working achieved things, so imagine what could be achieved if MUST and IMUSA were able to work formally with the club.

Both groups have indicated they would take a ‘don’t mention the war’ approach for the good of achieving things.

A better dialogue could result in us getting more away tickets, lower ticket prices – or a fascinating IMUSA-driven suggestion to hold back a small number of tickets so that under 16s living in a Manchester postcodes can buy tickets on match day.

It could mean fan embassies at Euro aways, initiatives to improve the Old Trafford atmosphere and the establishment of a fairer process for when the club accuses fans of doing something wrong.

The controversy of 2005 is a long way in the past and, like divorced parents who want the best for their kids, it would be great if, post Gill, differences can be put aside in the name of progress

So it’s over to you, Mr Woodward – are you going to let your SLOs pick up the phone?

This piece was contributed by Dale Haslam from Reds Away.

6 responses to “Will David Gill’s successor do more for the fans?”