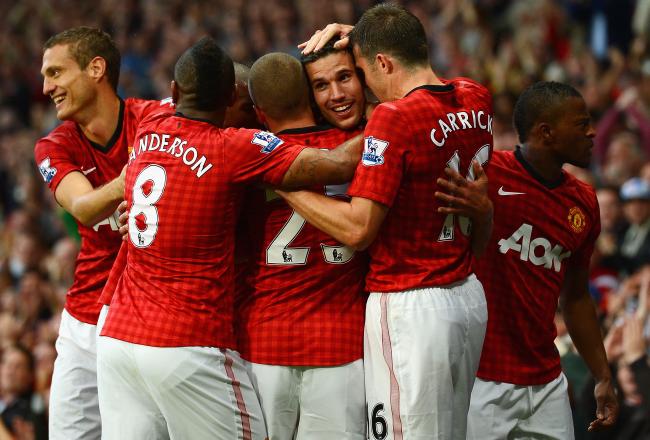 To look back at the unprecedentedly magical 1998/99 campaign with anything other than pure fondness and proudness is a distinct impossibility. Beating Arsenal to the title in such a nail-biting manner was majorly satisfying. To beat that ‘wee club from the North East’ in the FA Cup Final was the second leg of the impossible dream. There turned out to be two letters too long in that word as we miraculously made the impossible possible with THAT comeback against Bayern Munich in the Camp Nou.

We have not reached those dizzying, euphoric heights since. Despite constant success domestically, a failure to return to the ultimate football trophy heaven has made people question whether those heights will ever be scaled again by an English side.

But have the current crop, who are hungry to banish the nauseating nightmare of last, season got the capacity to re-write history?

The manager recently came out with a bold statement and direct message of confidence in believing that this squad in the here and now has more strength in depth and more quality than the treble side who will be forever immortalised as history-makers.

Sir Alex Ferguson in that recent interview stated, “We have a stronger squad now (than in 98/99). When we went to the Champions League final, Keane and Scholes were suspended but Henning Berg was the only injury. I still had to pull in a player [Jonathan Greening] who had only played once or twice in the first-team. He got a medal for being on the bench. That gives you an idea of the strength of the squad. It is nice to look back on these things and think how it was done at that particular time”.

On close analysis, Ferguson’s point has validation: with the plethora of attacking artillery and defensive nous to call upon, surely this year we would not see a situation of similar proportion to that of Jonathan Greening’s surprise call-up to the bench in Barcelona? (barring an horrendous backlog of injury misfortune).

Ferguson’s comments, in making a direct comparison to those glory boys, got me contemplating both respective squads and some stark and forthright similarities emerged when on closer inspection.

No-one could have forecasted that at the start of the 98/99 season, that we would create an unparalleled legacy. Especially given the suicidal manner in which we inexplicably succumbed to the pressures of a title race and blew a sizeable advantage over Arsenal. In that sense, it was time to right the wrongs and start a new chapter of success, which brings me onto this season. Of course, we do not need reminding of the harsh realities of the conclusion of the title race last year- but the way we let slip our lead last year rekindled bitter memories of yester year. Both the 98/99 and 2012/13 boys had a major point to prove, given our comfortable cushion in the title race this year and City not the force of last year, it looks likely that the current crop will match the 98/99 boys in getting the crown back.

The catalyst for this seismic shift in domestic hegemony and wrestling back our title was the capture of the ‘smiling assassin’. A few eyebrows were raised when United announced the signing of Caribbean cool-kid Dwight Yorke from Aston Villa. Having been interested in prolific Dutchman Patrick Kluivert for all that summer, before he rejected us, some saw the capture of Yorke as mediocre in comparison. That could not be further from reality though, as Yorke lit up Old Trafford with his beaming smile seemingly permanently etched across his face. He formed an instant friendship and footballing rapport with Andrew Cole- best mates off the pitch, defence destroyers on the pitch. They were always in ‘perfect harmony’ according to commentator Martin Tyler, which meant guaranteed goals, lots of them. Yorke finished top scorer that season in the league for us with 18 strikes, as well as crucial goals in European games against heavyweights Bayern, Barca, Inter and Juventus. Yorke brought the best out of Cole and ultimately his infectious personality and glowing character transformed the place, lifted the clouds of gloom and re-energised United.

If Yorke was a catalyst for that set of players, Robin van Persie has been a footballing powder-keg. Many wanting to see him fail labelled him as an ‘ageing, injury prone, expensive gamble’, when we signed the deadly Dutchman for £24m from Arsenal. One rather foolish journalist had the cheek or delusion to state that he would not reach double figures this season! Like the Cole-Yorke partnership, Van Persie instantly hit it off with Wayne Rooney. They looked excited to be in each other’s company on the field rather than against one another. They have at times almost telepathically been on each other’s wavelength- meaning once again that we have been treated to a goal avalanche. In truth, Van Persie has thus far been the most devastating difference in the title race this year. He is on course to retain the golden boot and need his 7 year barren run without touching silverware. It is apparent that his longing for trophies and his extra bit of class (the final piece in the jigsaw according to the manager and almost everyone associated with United) is inspiring the players who will still be smarting after last year’s tribulations, he is driving us on in our push for glory, as did the arrival of Yorke and preceding that Eric Cantona.

It is no coincidence that a new signing in the striking department has revamped our title hopes on both occasions.

The similarities do not end there. Over the years, the spirit of Manchester United has been encapsulated by our ‘never say die’ attitude, the ‘never know when you’re beaten’ maxim. These believes run deep in the United bloodstream, each Ferguson legacy of star-studded composed teams possess this uncanny knack that is a priceless commodity. The ability to score goals in the dying embers of a game when all hope appears to have vanished has been the cornerstone to our success and some of our more memorable moments (Nou Camp 99). 2 players who treated such late goals as their bread and butter have proved to be vital components of the United weaponry. The ‘baby-faced assassin’ Ole Gunnar Solskjaer was the original ‘super-sub’ before another baby-faced marksman took his baton- Mexican Javier Hernandez. Solskjaer scored late in games in the treble season (he kept our FA Cup dream alive by finishing off the dippers at Old Trafford) before sealing the unthinkable with THAT goal in Barcelona. Hernandez has erased the frustrations of last season by reproducing his first season form that took him to our hearts. Vital strikes at Villa in particular capped a typically defiant United comeback, whenever he plays this season, he scores. The quality in reserve from both eras played a huge role in the hunt for glory on all fronts.

Both Ferguson sides possessed goalkeepers who were constantly under the hyperbolic spotlight of the tabloid press. Peter Schmeichel, who had already confirmed the treble year would be his farewell, had ‘uncharacteristic errors creeping into his game’ according to the written press at the time. David de Gea was apparently a ‘rabbit in front of headlights’ and still cops an unjust amount of flack despite his steadier performances and recent heroics in the Bernabeu. Schmeichel had the last laugh, as his last moments in a United shirt were to do an unforgettable cartwheel and to lift the Champions League aloft alongside the manager who kept the faith, despite whatever criticism was being hurled in his direction. At present, De Gea is making a few journalists eat their words, after coming of age in defying Ronaldo and Co in the Bernabeu. The manager unconditionally believes in the Spaniard, as do the majority of our supporters- if he lifts silverware this season, a huge wwight will be lifted. Schmeichel came out the other side, as will big Dave.

It is staggering to read that at this stage of the season, our current points tally surpasses that of the treble side by a mammoth 14 points, and is the highest ever total in the Premier League under Ferguson. Our tally also topples that of the Arsenal Invincibles- who had 64 points after 26 games. Chelsea’s Mourinho are the only competitors, having accumulated the same total as ours presently, before they smashed the Premier League record. Yet, apparently this is not a vintage United side?

In a week where we took firm control over the title race, performed like Gladiators in the daunting Bernabeu to hold a slender advantage thanks to Danny Welbeck’s potentially pivotal away-goal and saw off Reading in the FA Cup, there is still next to no appreciation of this current crop of United pearls.

Of course, we will not get ahead of ourselves. Real Madrid are still a mighty force and will represent a steep challenge and severe test of our character and our quality. If Chelsea do what they need to do (not a given under agent Rafa) and beat Middlesbrough, then that FA Cup tie at Old Trafford will certainly not be a walk in the park. And as we saw last year, that lot are more than capable of rescuing a seemingly insurmountable deficit, but surely not twice in a row under Fergie?

There is no harm in dreaming though. Personally, regaining what is ours domestically this year is all that counts, anything on top of that is a bonus. But whilst the treble dream is still within reach, we can dare to believe.

We have taken inspiration from the 98-99 history makers and have surpassed them in the eyes of the manger. The similarities are there for all to see. The options we have at our disposal, as the manager has previously stated, means whatever side we field we take to the field with confidence and quality.

As Clive Tyldesley famously said before his immortalised ‘Beckham into Sheringham and Solskjaer has won it’ quote:

‘You have to feel, this is their year’.